anyone fed up with buying kurust in that tiny bottle for stupid money..
this stuff is baiscally the same but u get a large tub of it (1ltr to 5) for the same cash as the tiny kurust bottle and it seems to penetrate the rust better..
it also drys and leaves a protective barrier on the deactivated rust.
ive tested this on some old flakey tank straps and then left them out in the rain for a couple of months...the rust didnt come back!
the great thing is its extremly runny so spray it in your sills and collect the residue that comes out the drain holes...it'll stop any rust hiding around spot weld etc and then seal it!
i spoke to the company asking if it would do the job for a car and they were extreemly helpfull on best way to use it.
you can also underseal or paint on top of it which they recommended..
amazon or ebay... 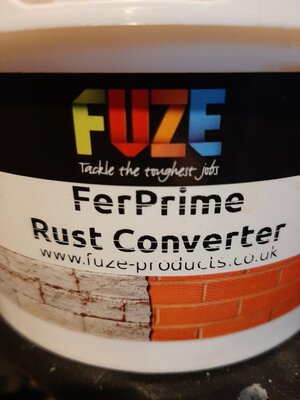