Chips and scratches and everything else !!

As some of you are aware, my car went into the bodyshop recently to have new front and rear bumpers and some side skirts fitted. They were also going to spray the bonnet and the wings to get rid of all the stone chips.

Well the car came back without the side skirts as they are such a bad fit they wanted an extra £200 to get them to fit correctly!
The car came back also with severe orange peel on everything they had painted

The car was booked back in for them to wetsand everything and I collected it yesterday.
Better, but still areas in great need of improvement. However, I don't trust them to ever get it right so I will live with most of the faults......or try to improve them myself. At least none of this cost me any money as it was a claim against the neighbour whose fence fell down and landed on my car.

This is some of the pictures of when I first got it back: 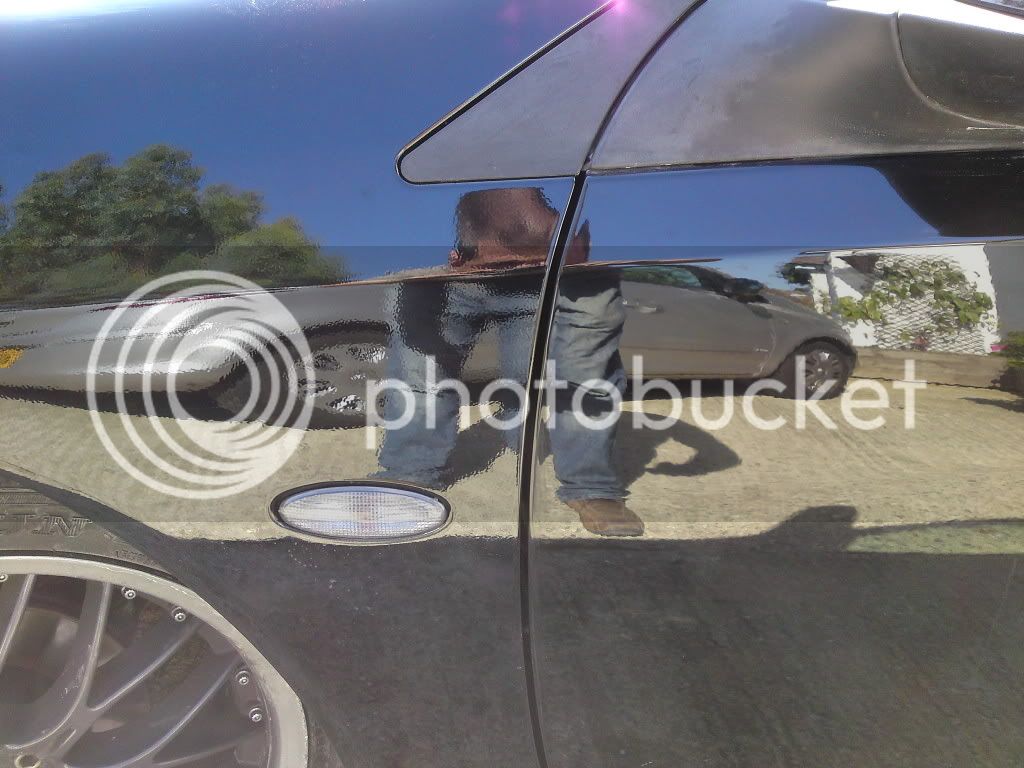 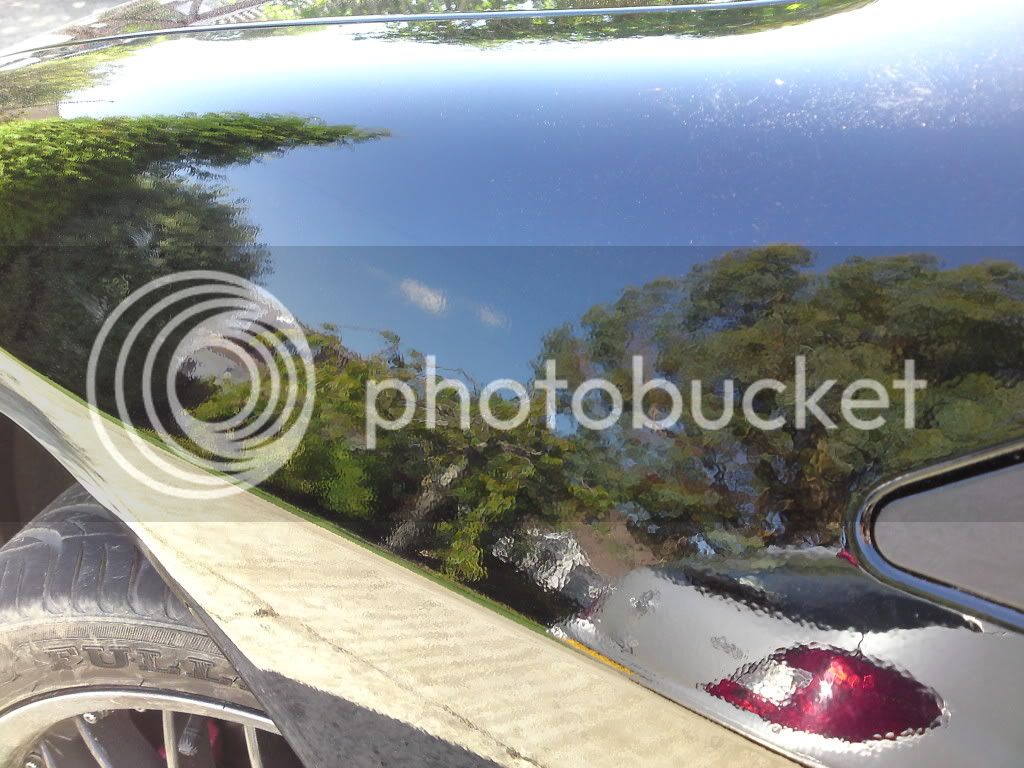 Clearly a monkey had been allowed to machine polish the car ! 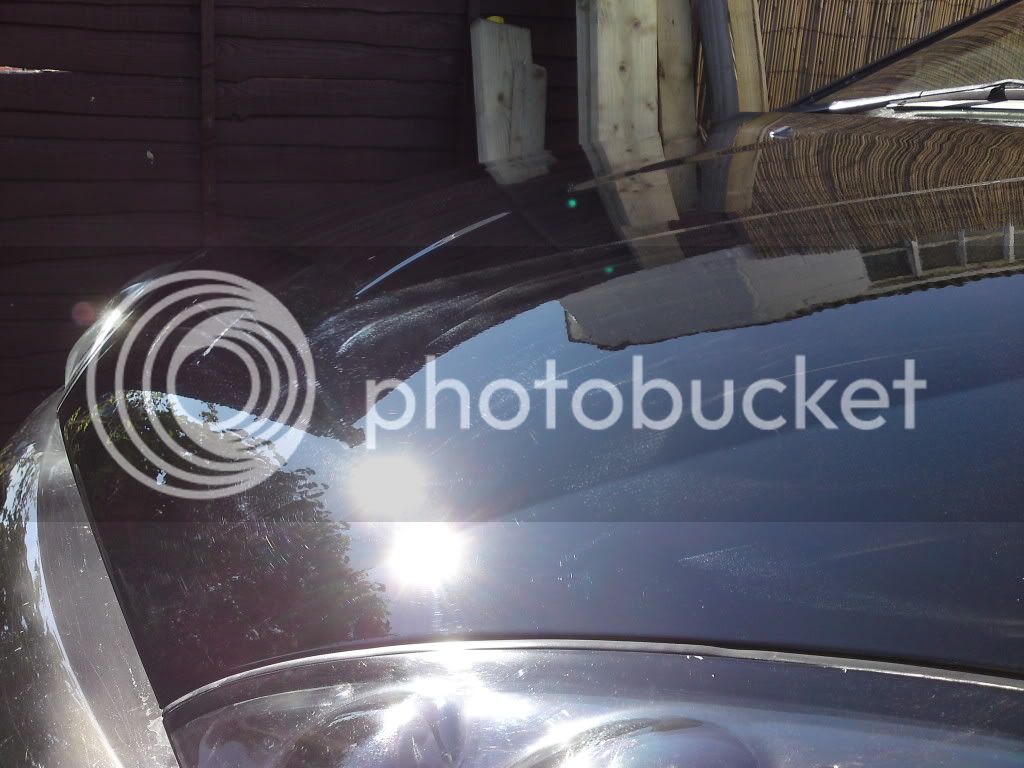 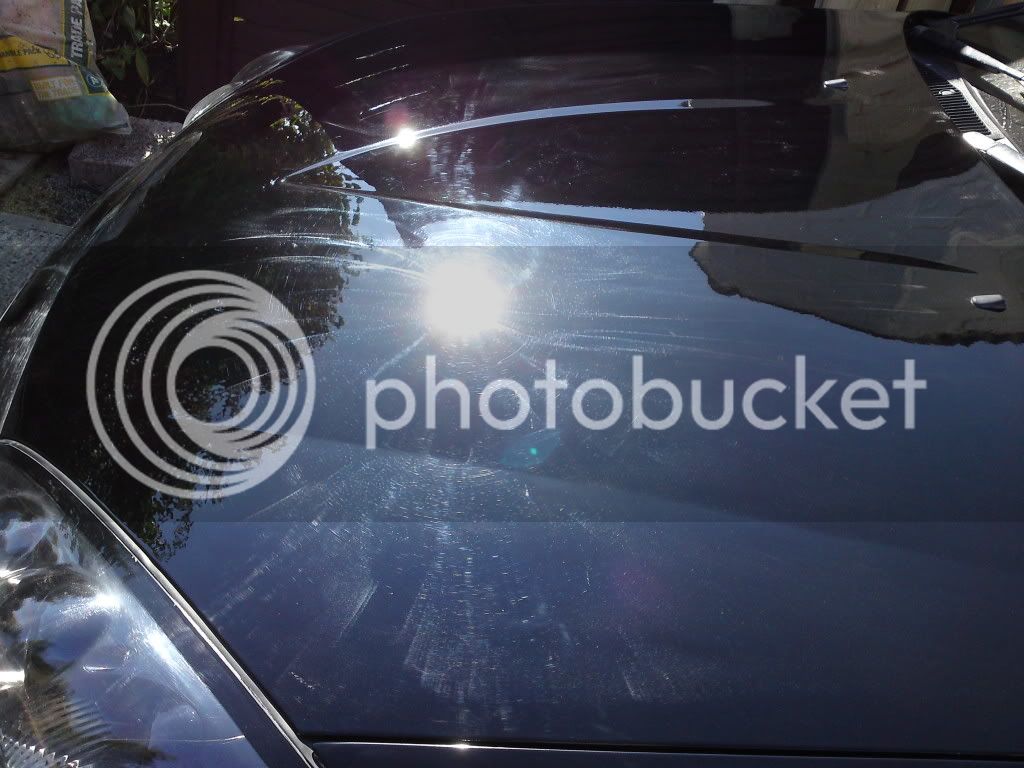 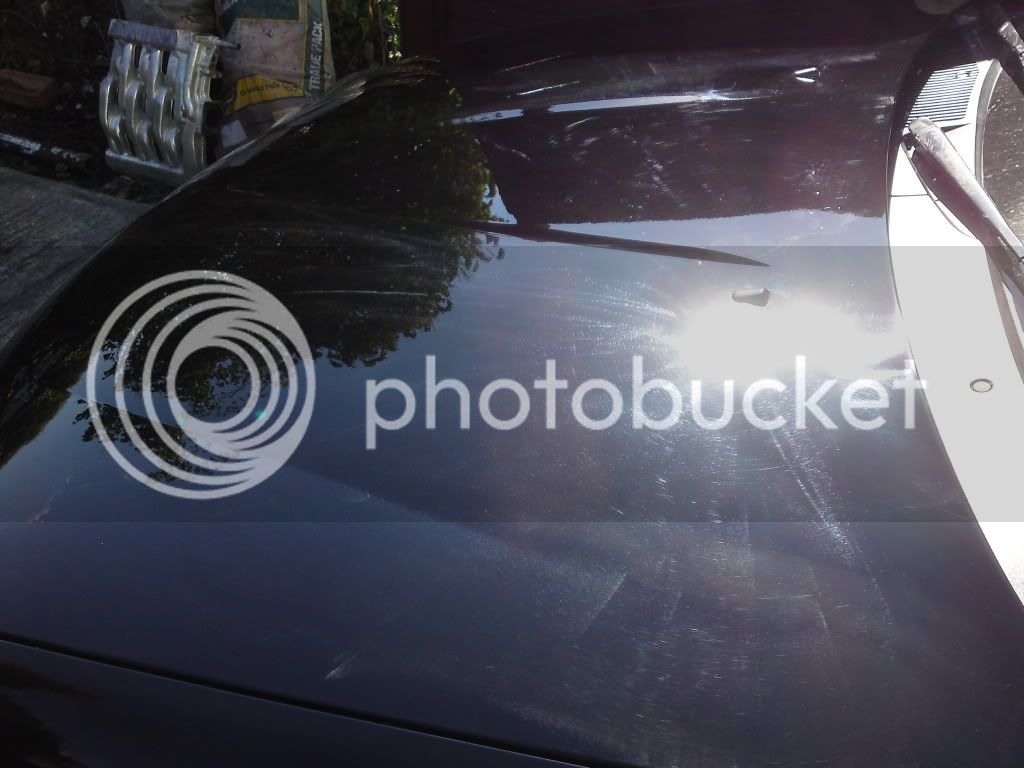 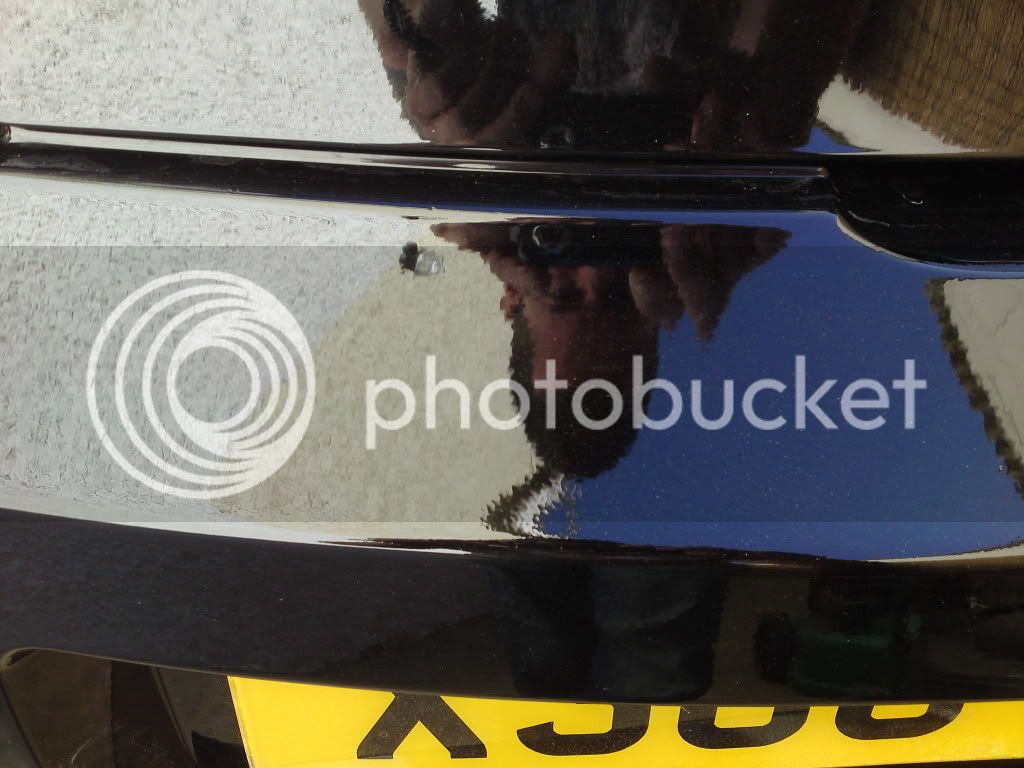 Below the rear number plate: 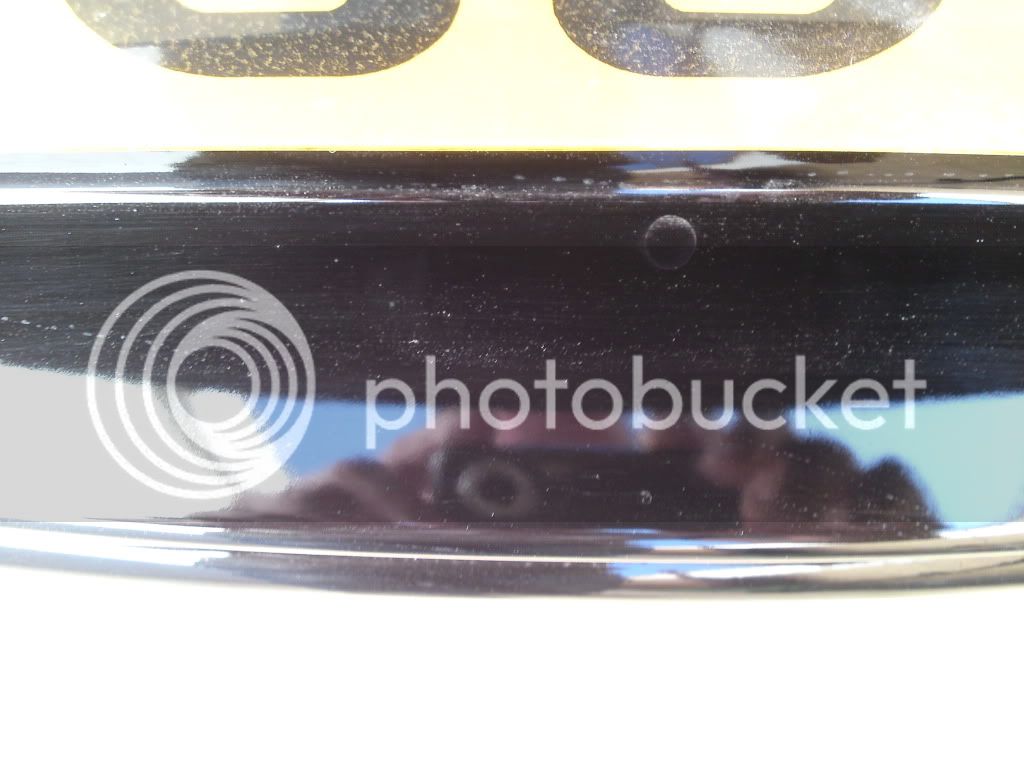 The car was covered in overspray and the roof and windows and rear hatch were covered in red overspray!
This is the clay bar after just doing the roof! The windscreen and rear window and bootlid all came up the same ! 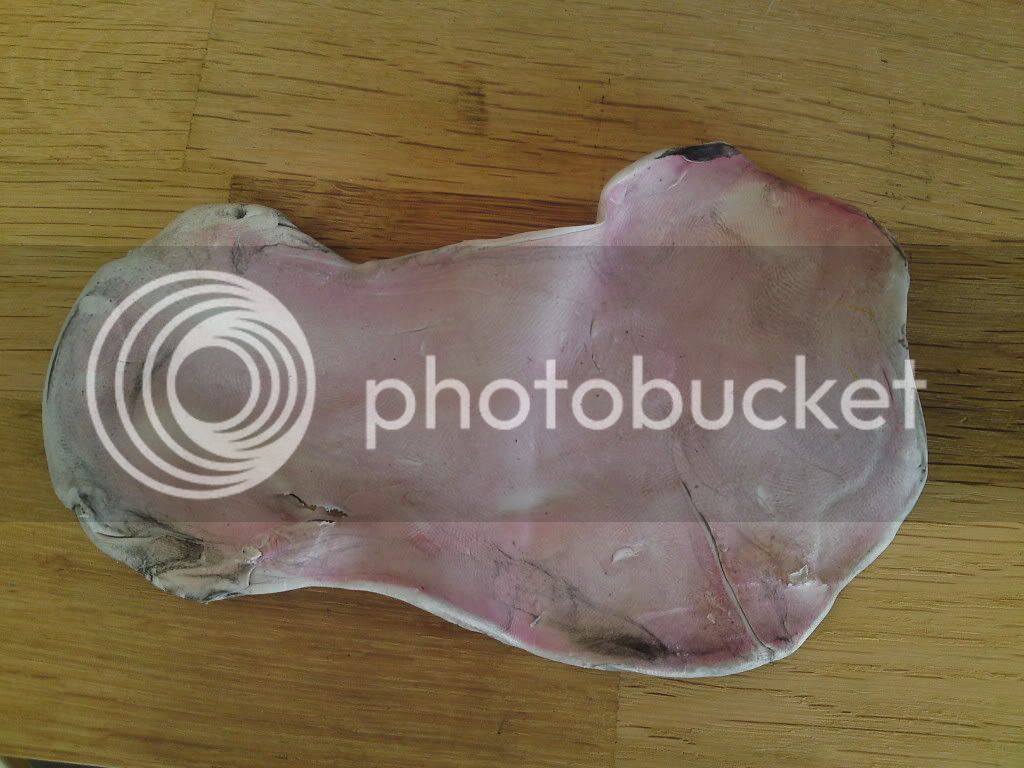 This is how the car looks now. I did wash it when it came home and whilst the bonnet is much less orange peely, whomever had machined it had clearly let the power cable drape over the bonnet as it was riddled with scratches. I didn't take any photos of these (I should have done) as I just wanted to crack on and get rid of them. I have got rid of about 85% of them by cutting back the bonnet in some areas 8 times !!!! 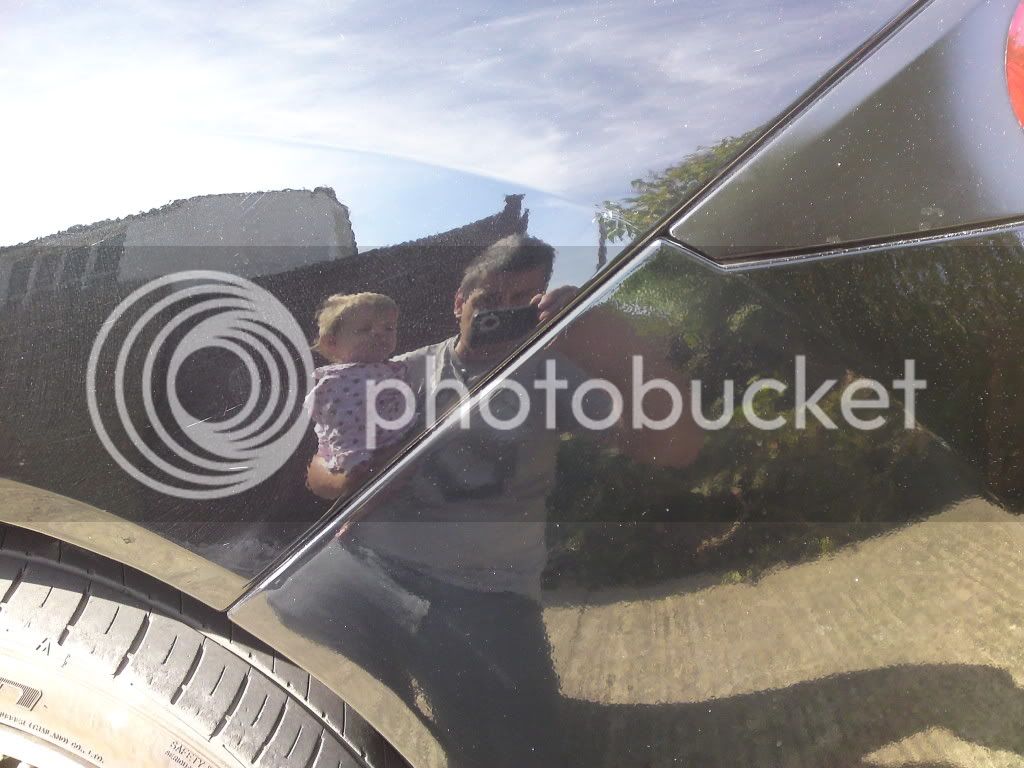 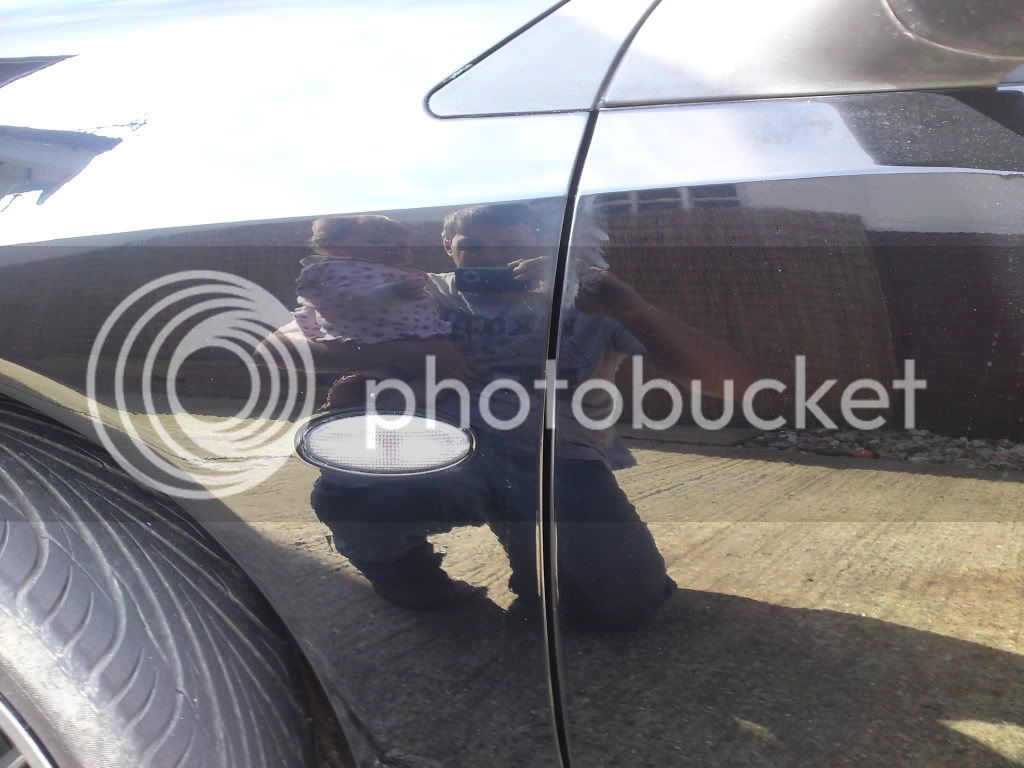 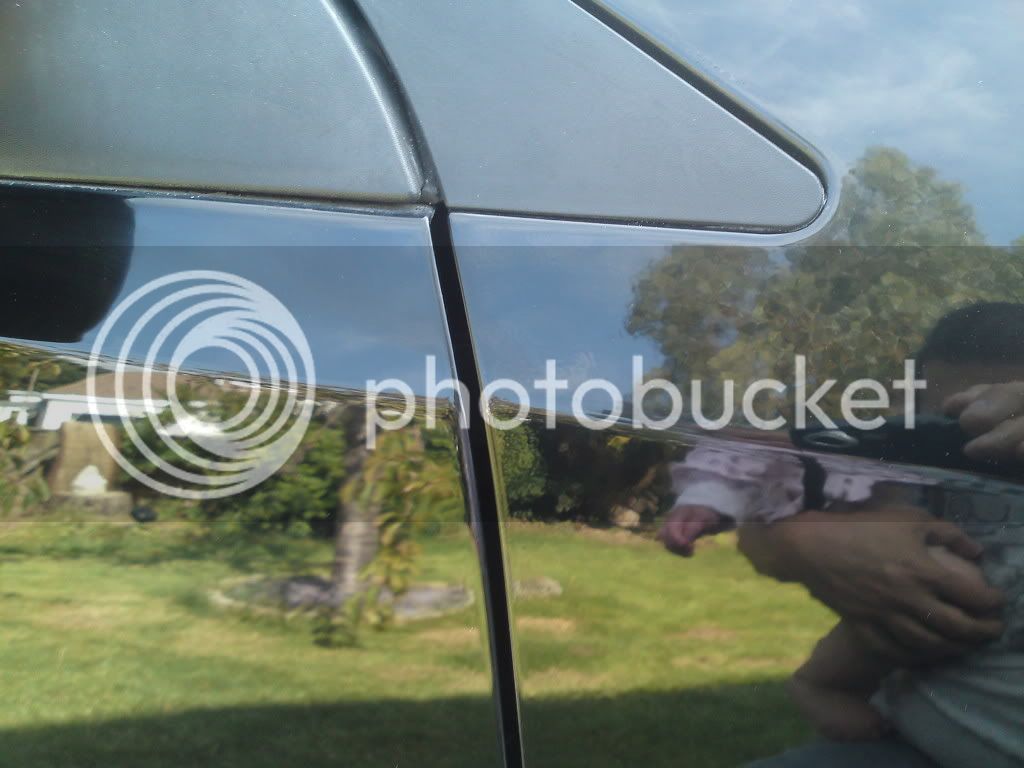 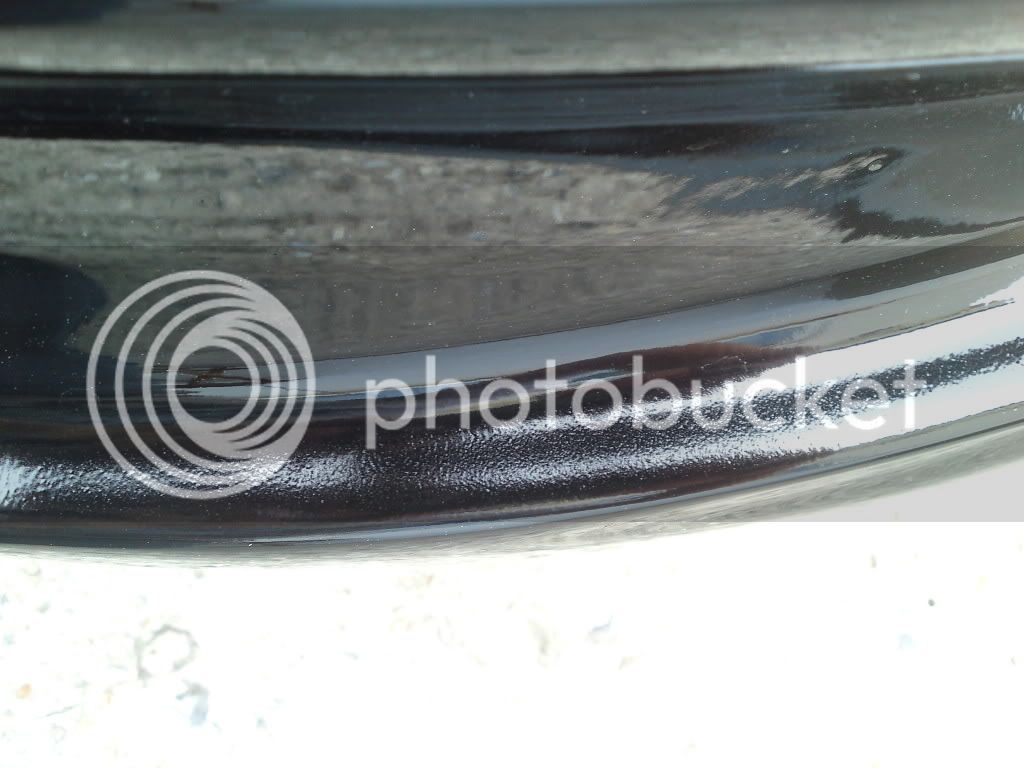 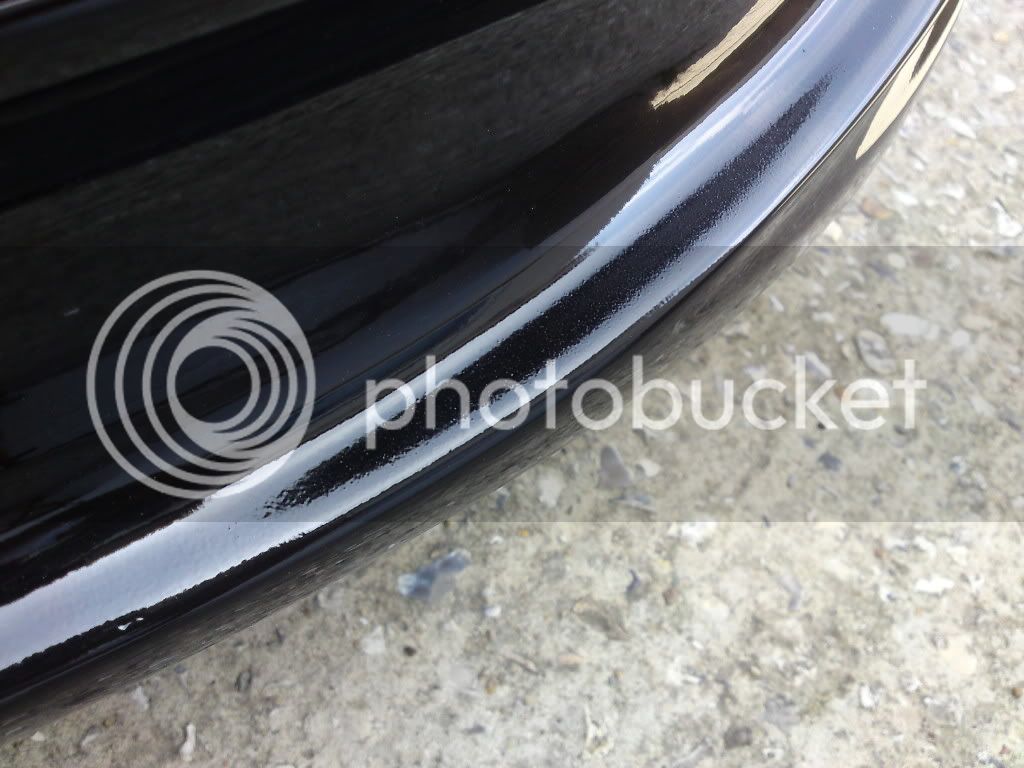 I started with a chip that the previous owner had touched up, and had done so VERY badly. It was like a wort on the side of the car! 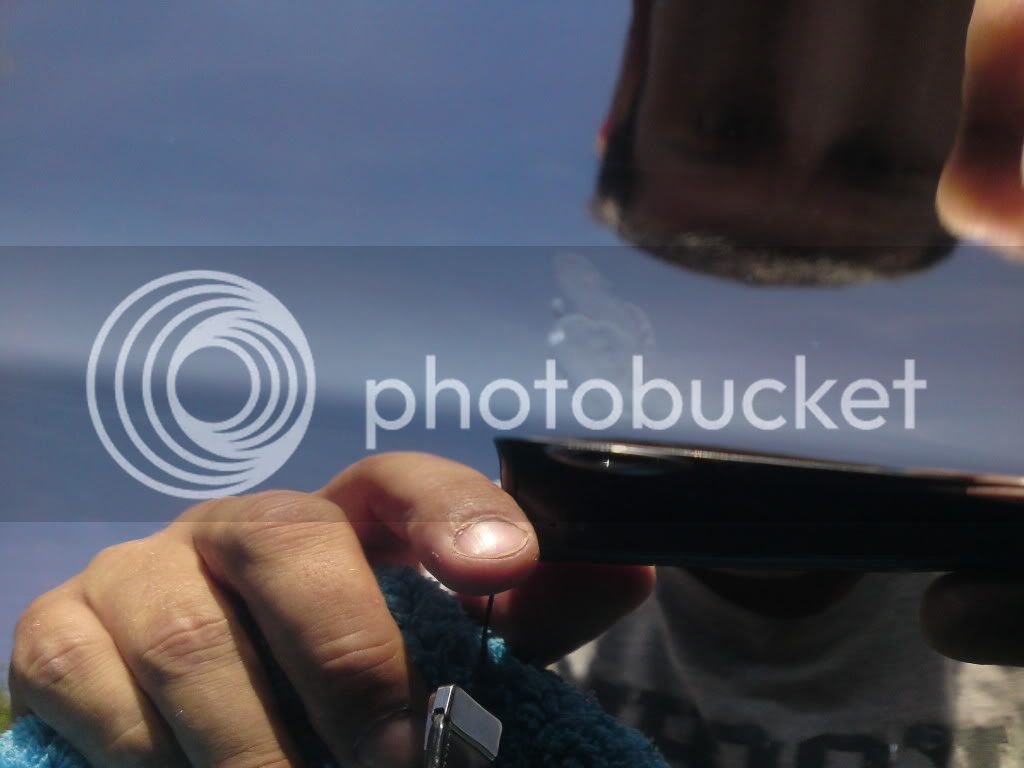 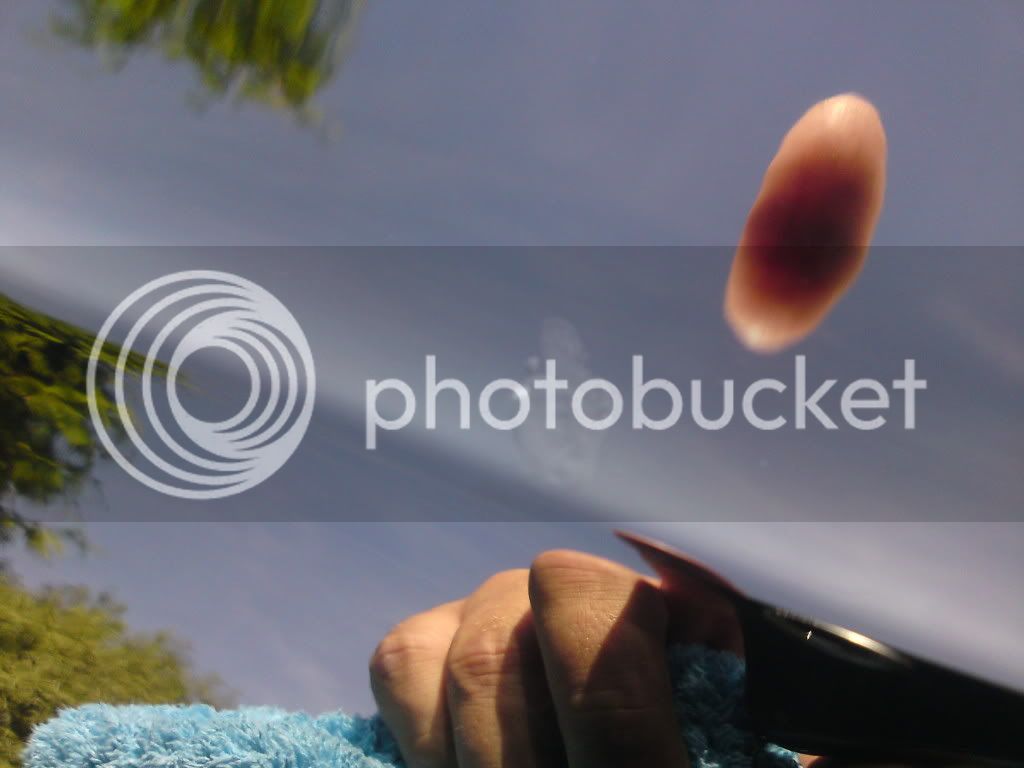 So out with the wet and dry...bit tricky as it was on a crease line but who dares wins and all that! lol 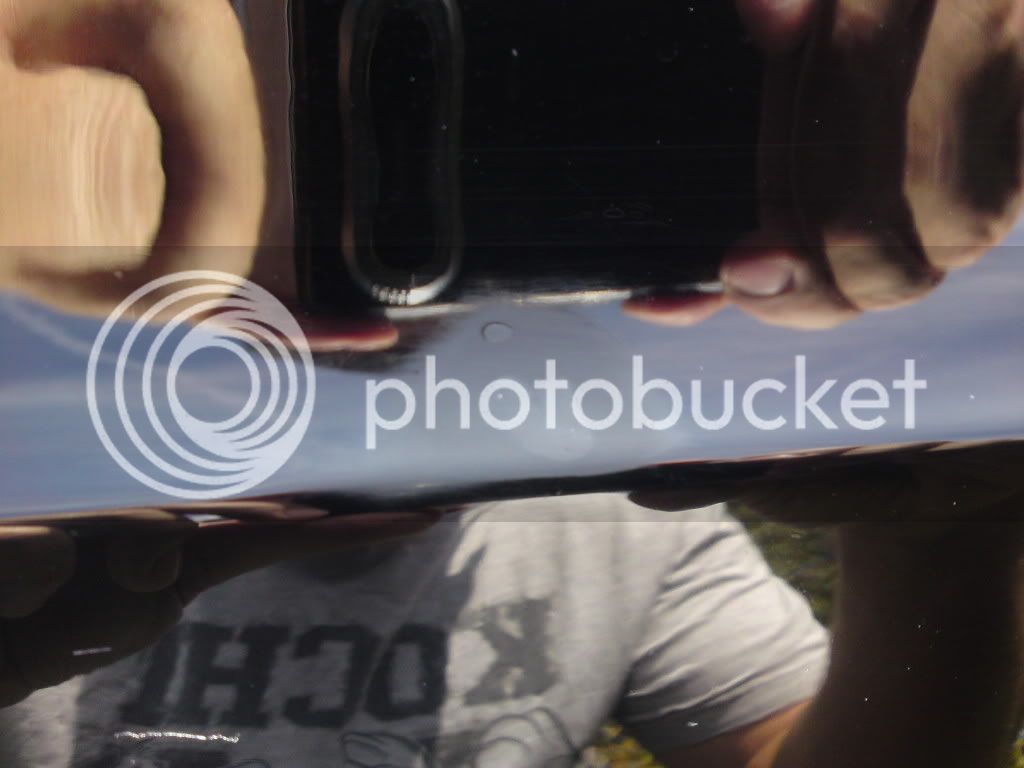 Then onto some cutting with the DA 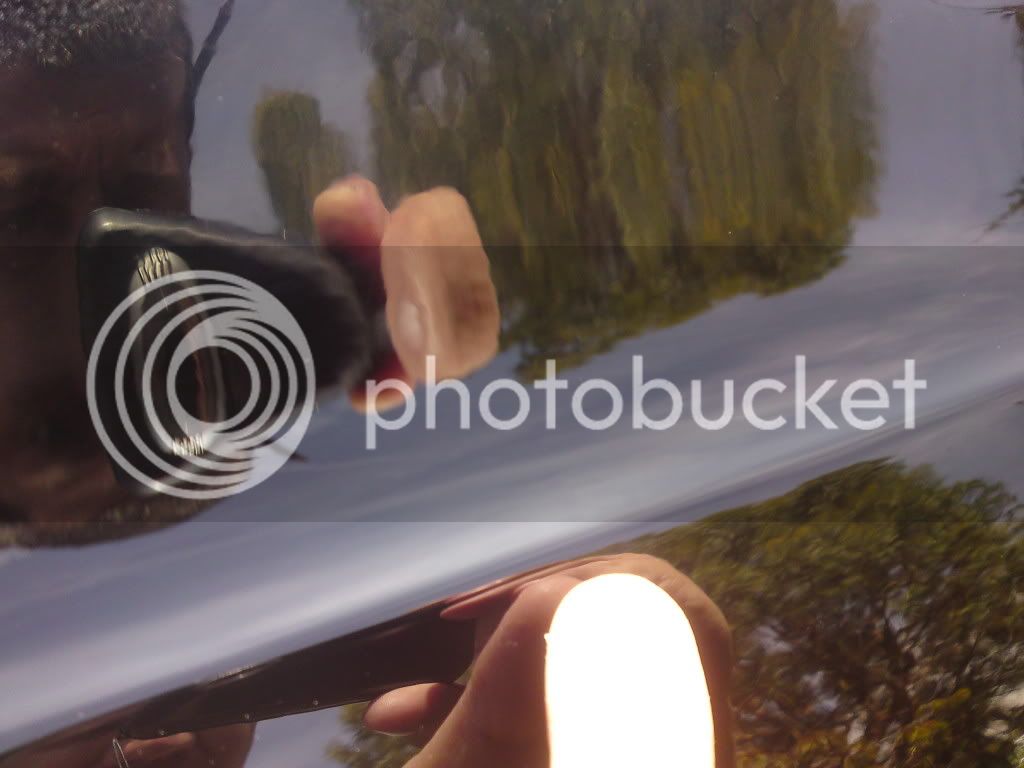 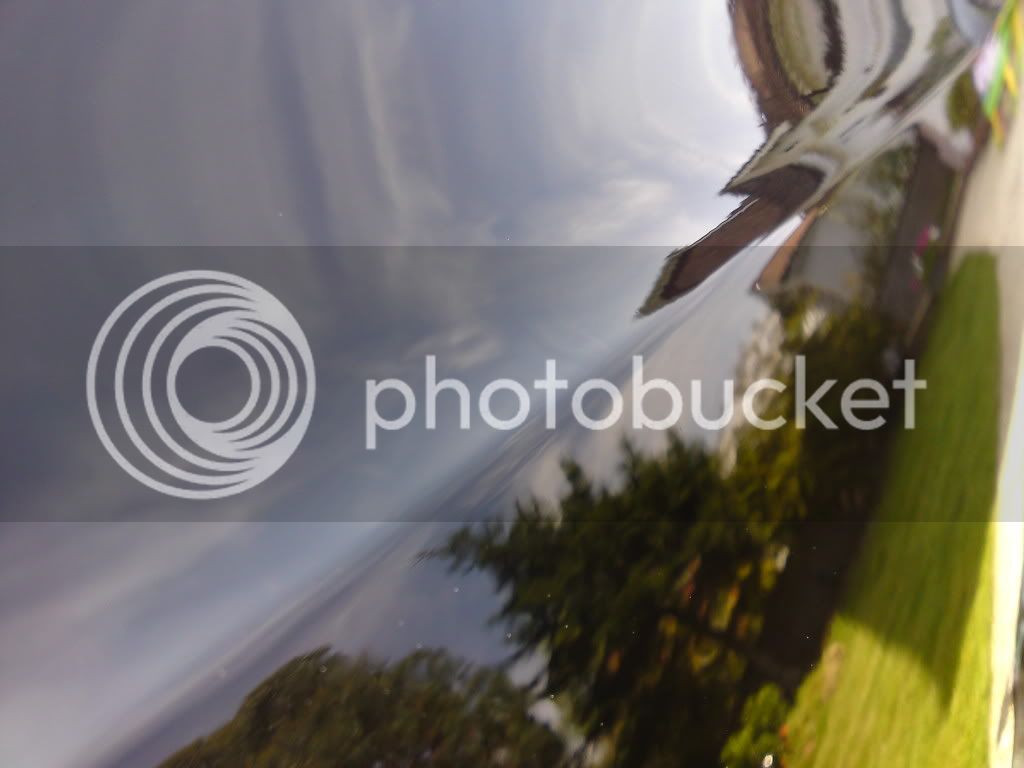 Overall, I would say 95% better than it was. Could have had another go with the wet N dry but for a daily driver, it's good enough for me.

Onto the front lip. Again, not a flat surface so a nightmare to machine polish. Doubly so as my small compunding pad gave up the ghost when I did the Audi and I haven't got round to buying a new one. 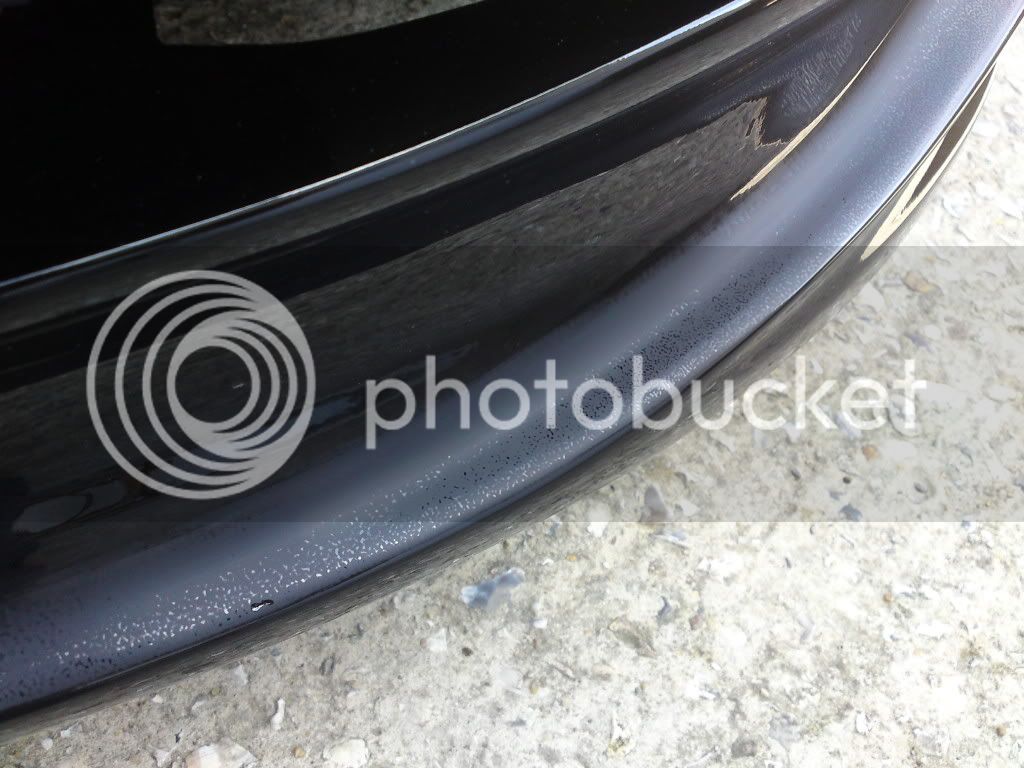 As you can see above, I haven't got a uniform sanded surface, but TBH I was just playing. I will do it again (and better) once I get a new spot compounding pad.
Still managed to achieve this however after just 1 pass. 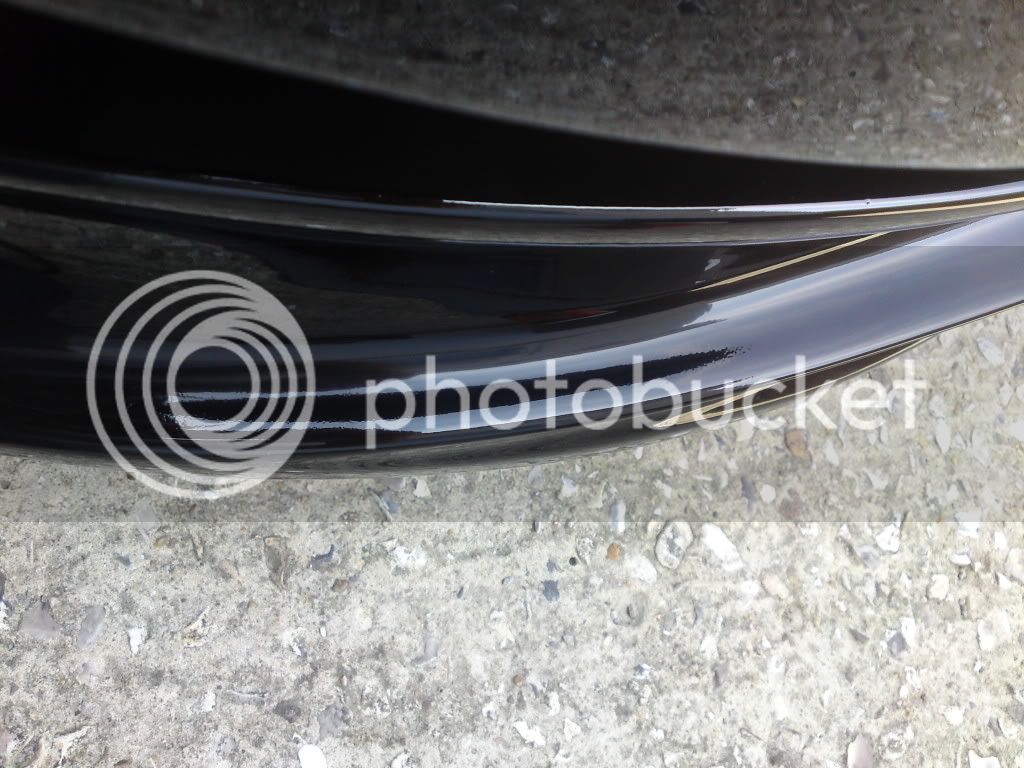 Onto the rear bumper where a nice new scratch had appeared ! 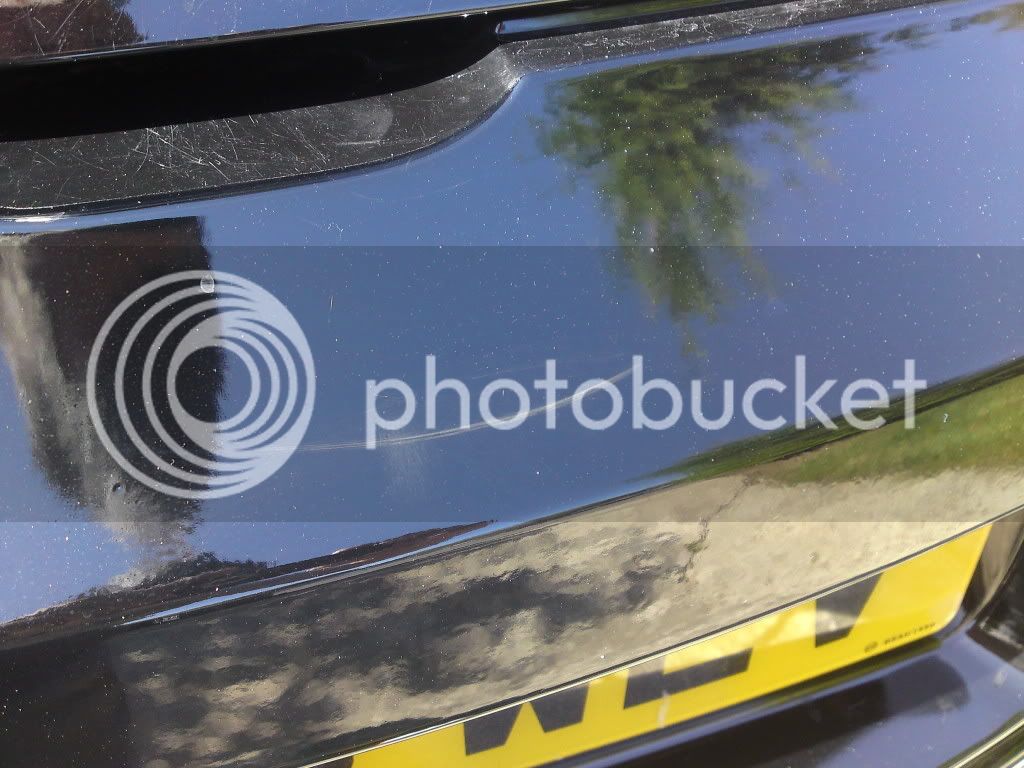 Oh...see where your fingers go to open the rear hatch? See how scratched it is? Well when they fitted my rear valence and painted the whole of the rear bumper.......they taped that bit off so it didn't get painted

After 2 passes, I have acheived this: 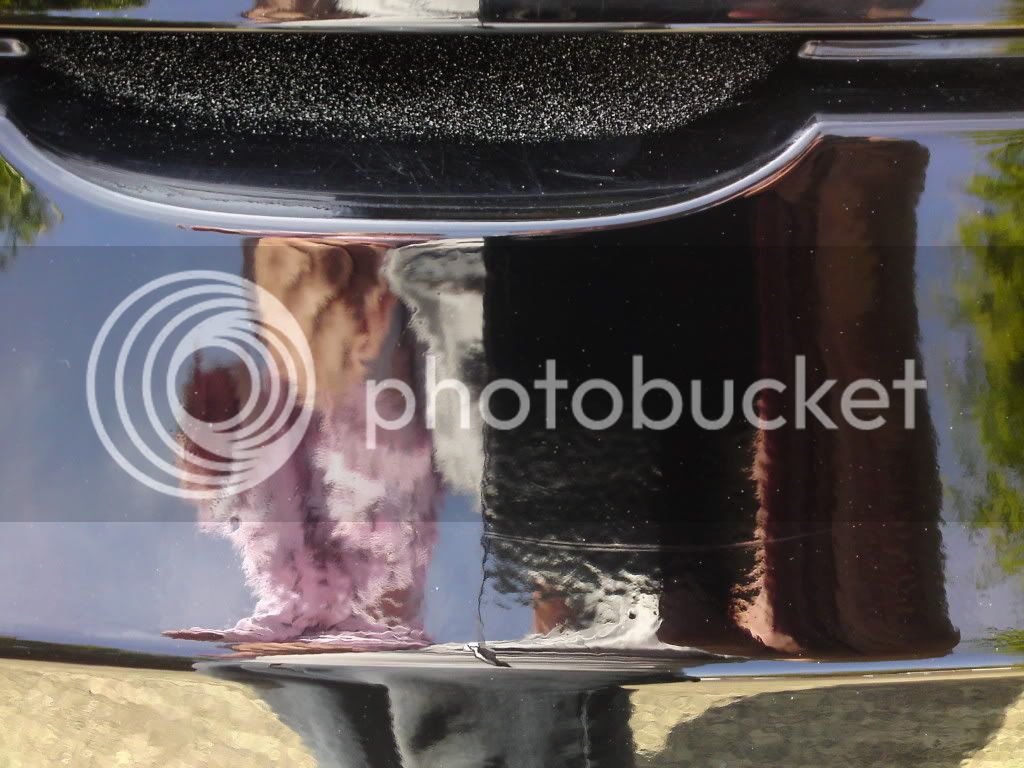 I haven't finished that yet, but the little one needed some daddy time so I will have to carry on later.

I'll be keeping this thread updated as and when I manage to rectify all the problems.

Oh. Before anyone ask. The work was done by an insurance approved accident repair center and yes, I did see some of their work before hand and yes, I spoke to a previous customer who was very happy with her car !!!

Surely to god the garage concerned have a responsibility to make your car perfect?

They do, but if they think the car is good enough to give back to a customer after having it back once already, would you trust them to ever get it right??

I don't want them anywhere near my car again.

You really don't have much luck with garages do you Paul. Looks like you need to stick to driving a standard cat someone upstairs isn't looking out for you. That bit about the red over spray has to be the icing on the cake, numpty's

Sent from my U20i using Tapatalk

I think the garage should be named and shamed, that workmanship is worse than shoddy. It that had happened to my car I would have taken it to another repair centre to get it right and sent the bill back to the bodgers.
P

As Matt says, you don`t have a lot of luck with bodyshops, but if this was done by an approved insurance bodyshop they should be reported to the insurance company, they are supposed to guarantee thier work.

Wish this was over 18s Paul i would really vent my spleen. Insurance companies go to large so called expert bodyshops .The guy who painted mine can't get insurance approval because he has a small unit in a mill and doesn't have a baking booth. We can't do insurance or otherwise work because thier is only two of us and we are not VAT registered. Total joke Phil our bodylad has over 20 years experience and Nick and myself have over 45 years between us. Not someone with an NVQ and a few crappy bought qualifications.

I think its a case of, if you want something done, do it yourself, probably find you would have done a better job and it would have cost the insurer's less money. In hinesight I can add this garage to the list of ones not to go to including Autocrap and Twisted<Blured> Vision

OMG!!! Paul, mate that is terrible, I've seen some poor repair work before, but never that bad. You have done well to bring it up the way you have, although as you say, not quite perfect, but loads better than those numpties did. That orange peel in really bad. Will make me really think before letting mine go anywhere for a repair/respray.

Just gets on my t*** that these people call themselves painters!!!!

I CAN DO BETTER WITH A BLOODY AIRARSEOLE!!!! FFS!!
P

Wouldn't put up with it, i know its hindsight, but should of told them the work was no where near acceptable & if they didn't put right you would have insurance co inspector out, if they valued the insurance work they get ( which keeps most of them going ) they would of sorted !. However, as this hasn't happened, you have my sympathies, & its just another case of the absolute **** service that seems so prevelant in our society today. Biggest problem is we've come to accept it as the norm nowadays !!!

I'm sorry to hear about this Paul, you're making a great job of putting that dodgy paintjob right...........BUT you shouldn't have to mate IMO!

Al/Pid would have done a far superior job to that.


I don't believe that for one minute!!

I know where you're coming from Paul, the idiot that sprayed my spoiler talked a good job and the spoiler looked great until I washed the car, then all the pitting appeared, it seemed he'd probably flatted the paint at some point and then sprayed some more but not cleaned the residue from it. The spoiler went back (attached to the car) twice, still wasn't 100% happy but he'd had 3 goes and still hadn't got it right so I put it down to him being a tool.

Richb said:
I don't believe that for one minute!!

I know where you're coming from Paul, the idiot that sprayed my spoiler talked a good job and the spoiler looked great until I washed the car, then all the pitting appeared, it seemed he'd probably flatted the paint at some point and then sprayed some more but not cleaned the residue from it. The spoiler went back (attached to the car) twice, still wasn't 100% happy but he'd had 3 goes and still hadn't got it right so I put him down with my tool.
Click to expand...

Richb said:
I don't believe that for one minute!!

I know where you're coming from Paul, the idiot that sprayed my spoiler talked a good job and the spoiler looked great until I washed the car, then all the pitting appeared, it seemed he'd probably flatted the paint at some point and then sprayed some more but not cleaned the residue from it. The spoiler went back (attached to the car) twice, still wasn't 100% happy but he'd had 3 goes and still hadn't got it right so I put it down to him being a tool.
Click to expand...


You and Paul both know we don't have the bandwidth for a reply from me. All I can say is if they're insurance approved then I'd be reporting them to the MVBRA. Also get the car inspected by your insurers and demand a written warranty for the work carried out so if/when it goes flat and peels they put it right!! To let them get away with it is as criminal as their standard of work.
You must log in or register to reply here.
Share:
Facebook Twitter Reddit WhatsApp Email Share Link