Seeing as a few members are interested in Lewys Fog Light / Daytime Running lights mod (Myself included if my other idea doesn't work out), I thought I would do a quick "How To" on refurbing the lights.

Before I go any further, I just want to say that the reason I have never seen a Cougar with a broken fog light became very apparant to me whilst doing this.
I have NEVER come across a plastic so bloody hard in all my life !

When I did the headlights, due to some deep scratches I had to go down to 600 grit paper.
For these puppies (and my car has only done 50k miles so God knows what some of your lights are like with average or above average mileage), I had to drop down to 240 grit !!! Even then I had to rub and rub and rub.

Right. So this was what they were like to start with. I only took a photo of 1 side for some reason....doh! 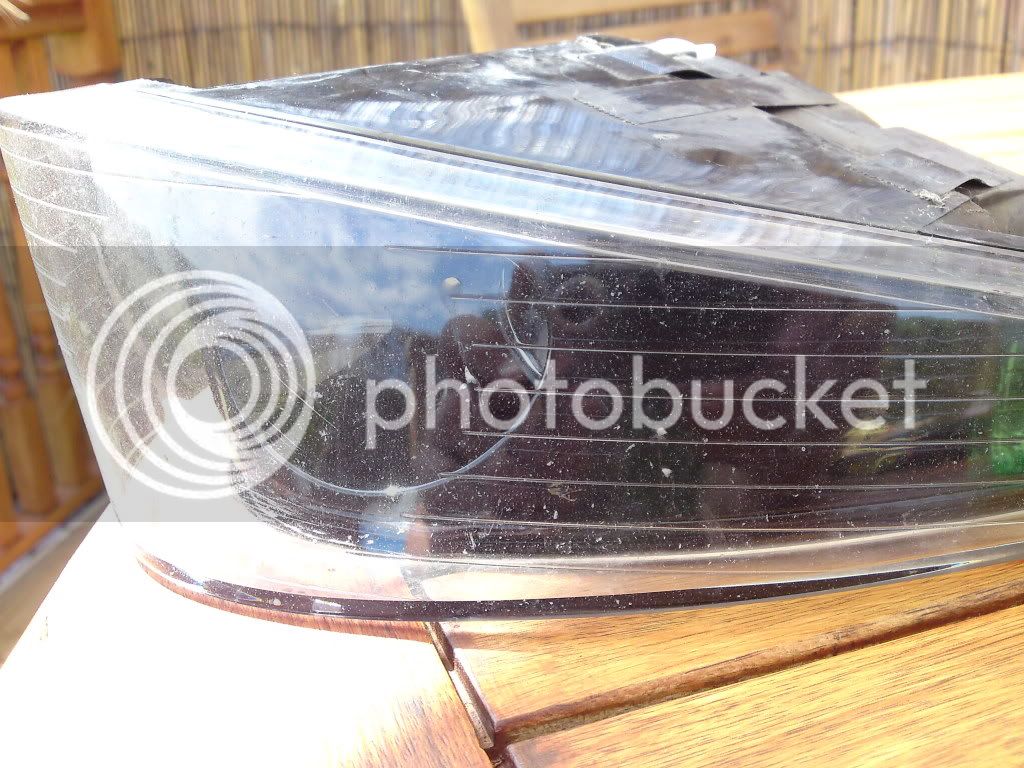 After attempting 800 grit for about 30 mins, the best I could get was this: 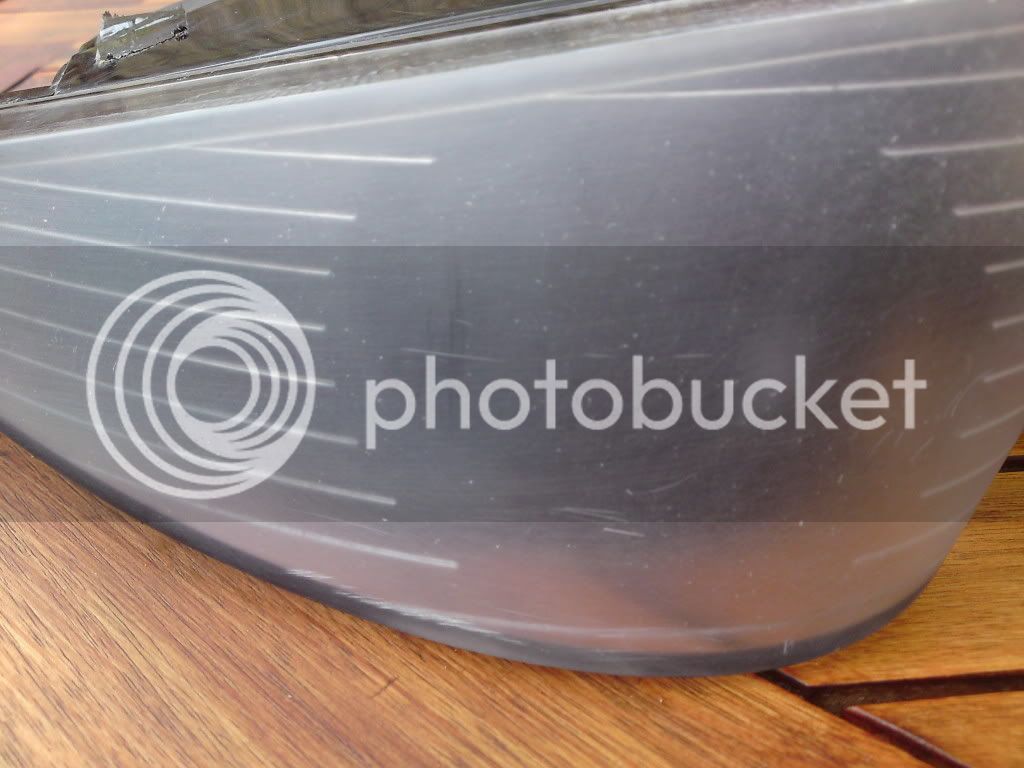 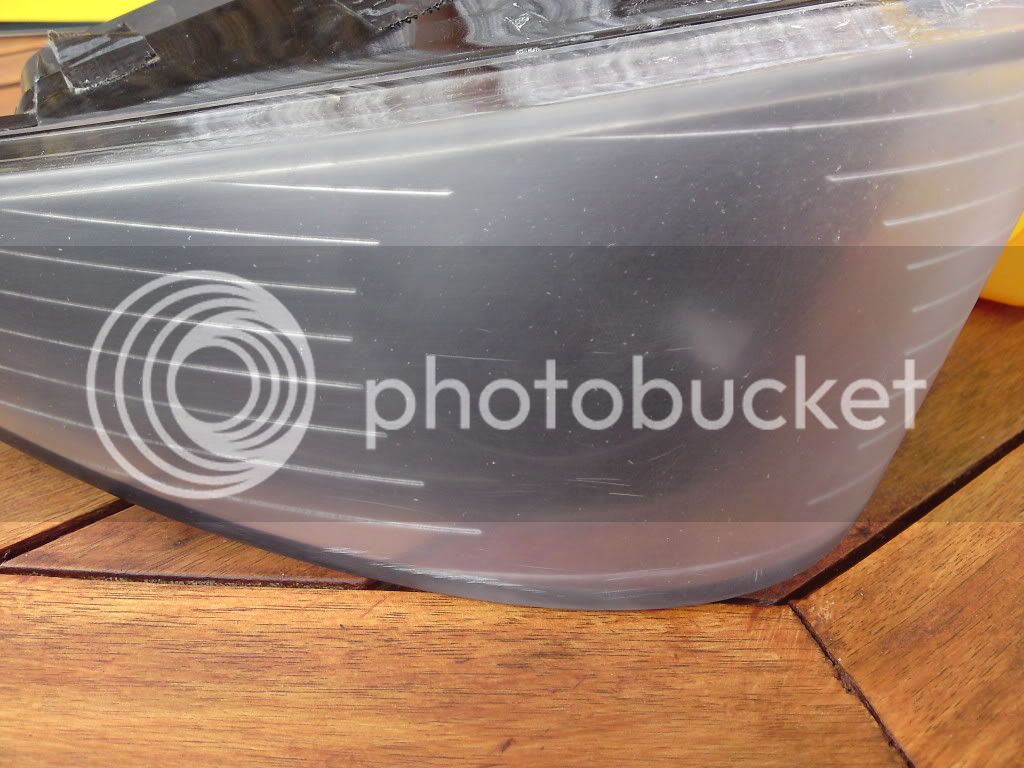 As you can see, still some very visible scratches and chips.
Now at this point I was stuck between two thoughts. Do I spend more time and effort getting it perfect, or do I leave as is because hey, it's a fog light. It's gonna get chipped and scratched again anyway!

Those that know me, will of course understand why i went with perfection! 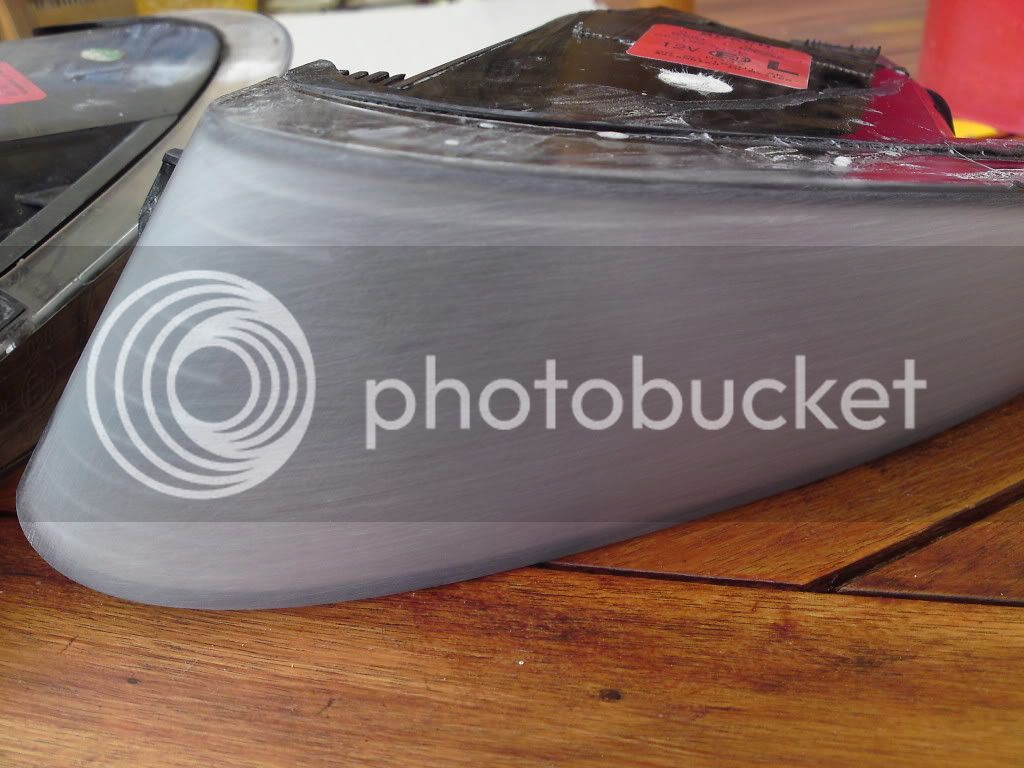 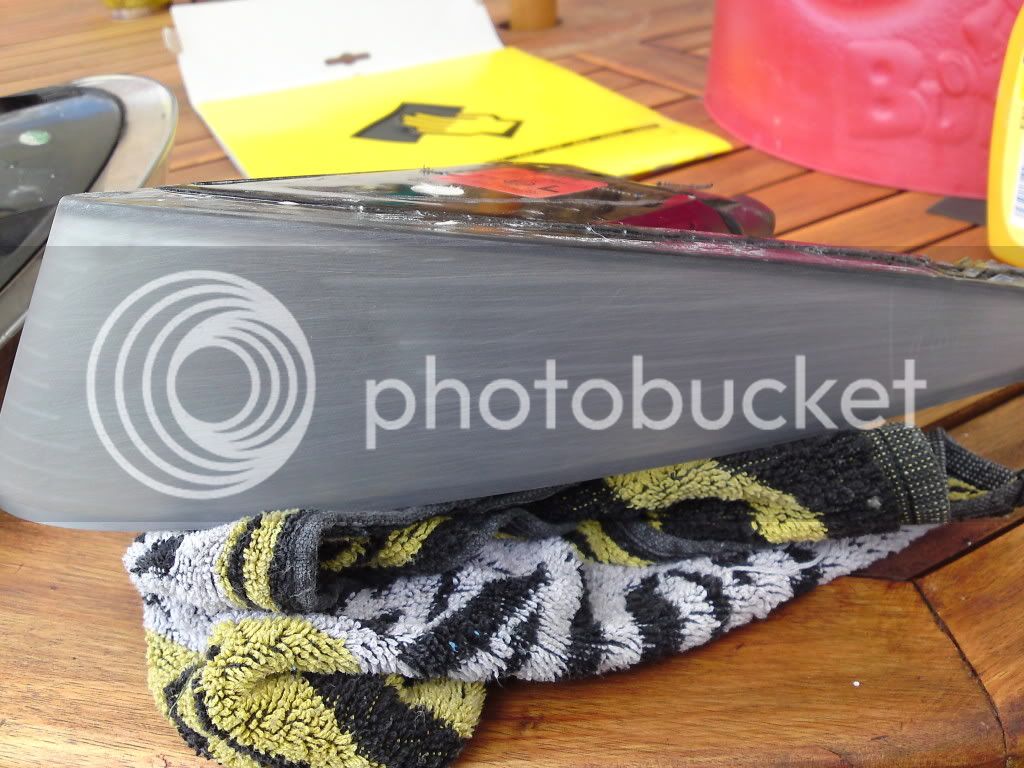 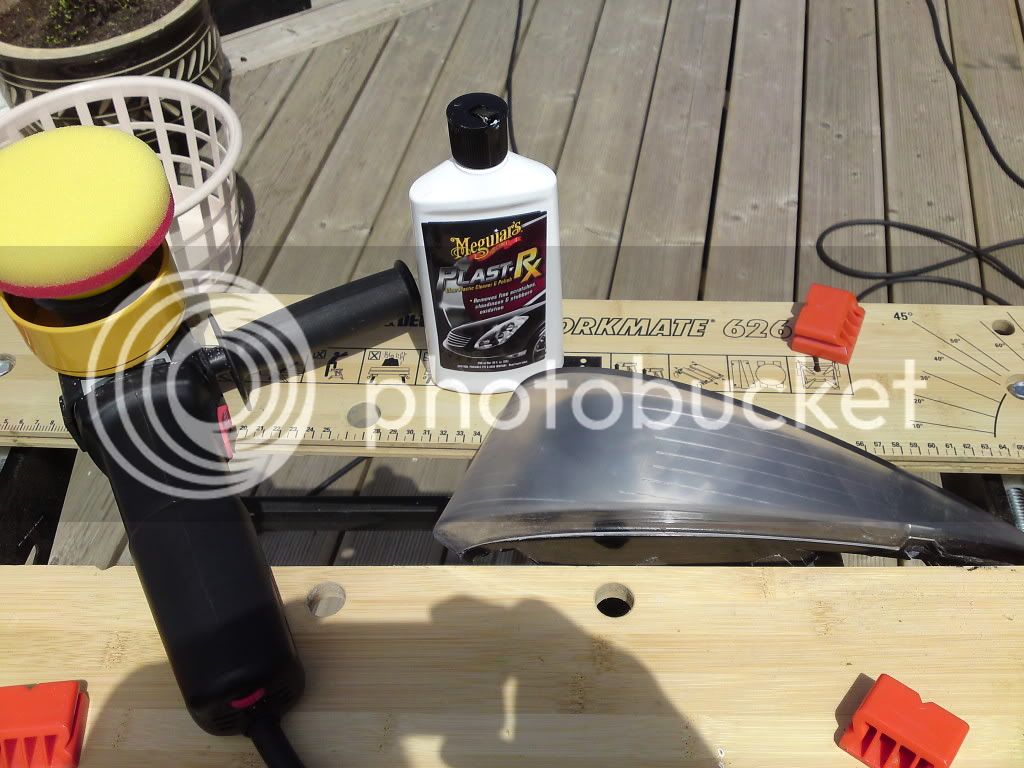 Finished result was ruined somewhat by the filth and muck that was now very visible inside the lense! 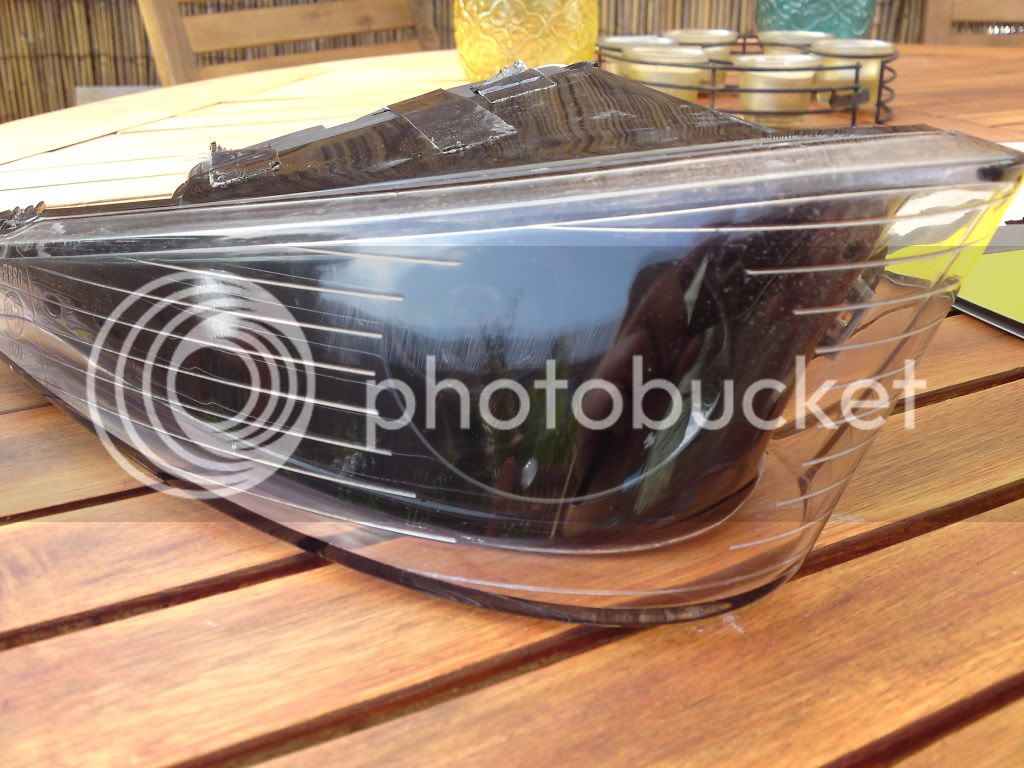 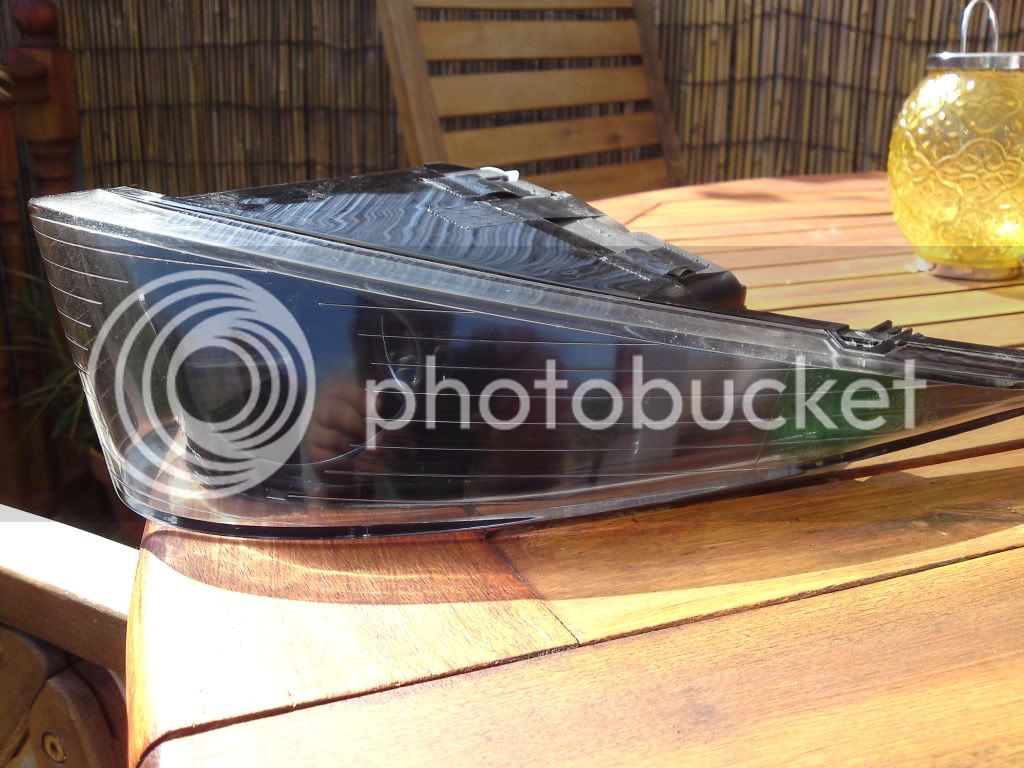 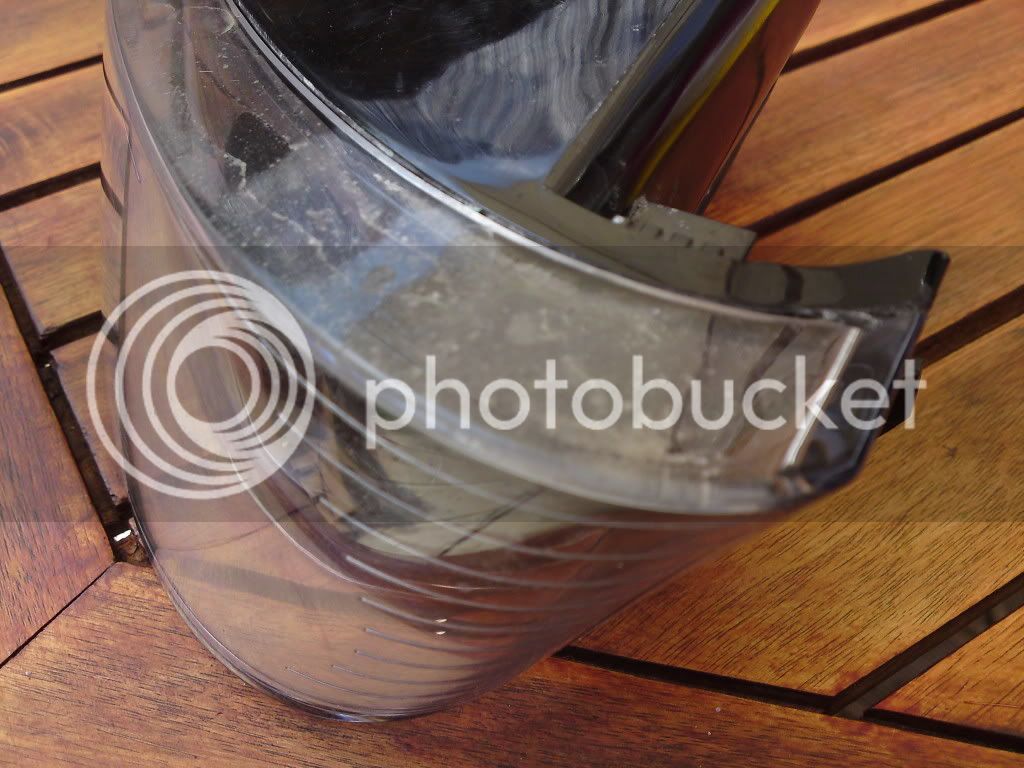 Anyhow, before I cracked them both open to clean the inside, I did a side by side comparison shot. Must admit, feeling very pleased with the outcome. 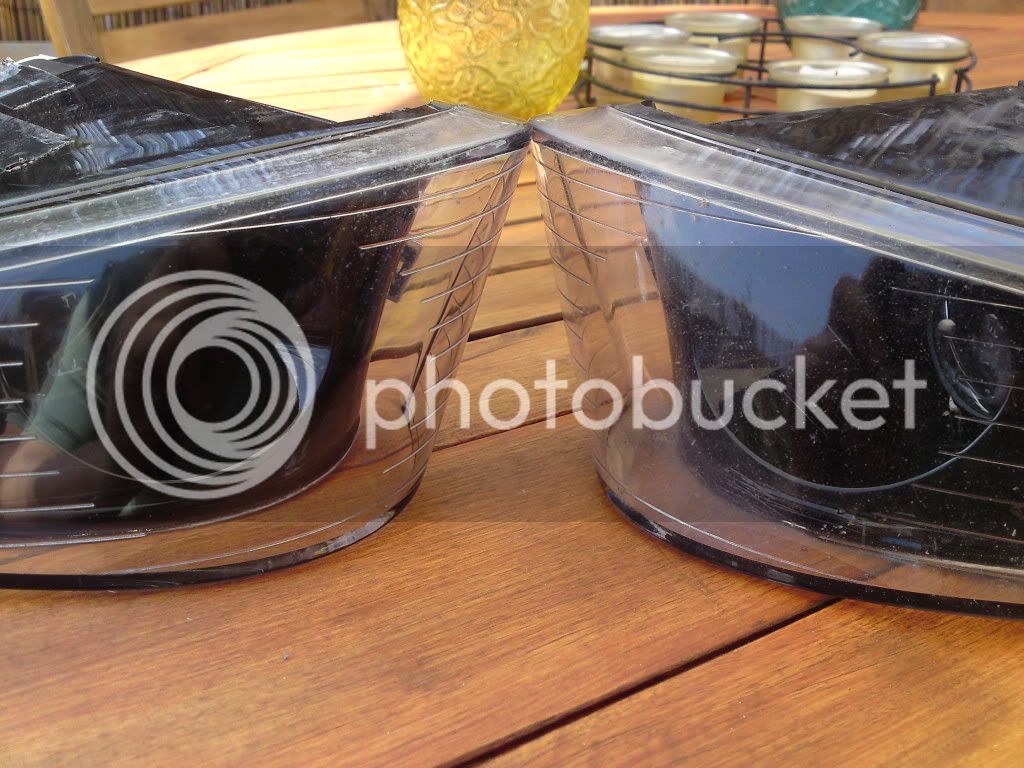 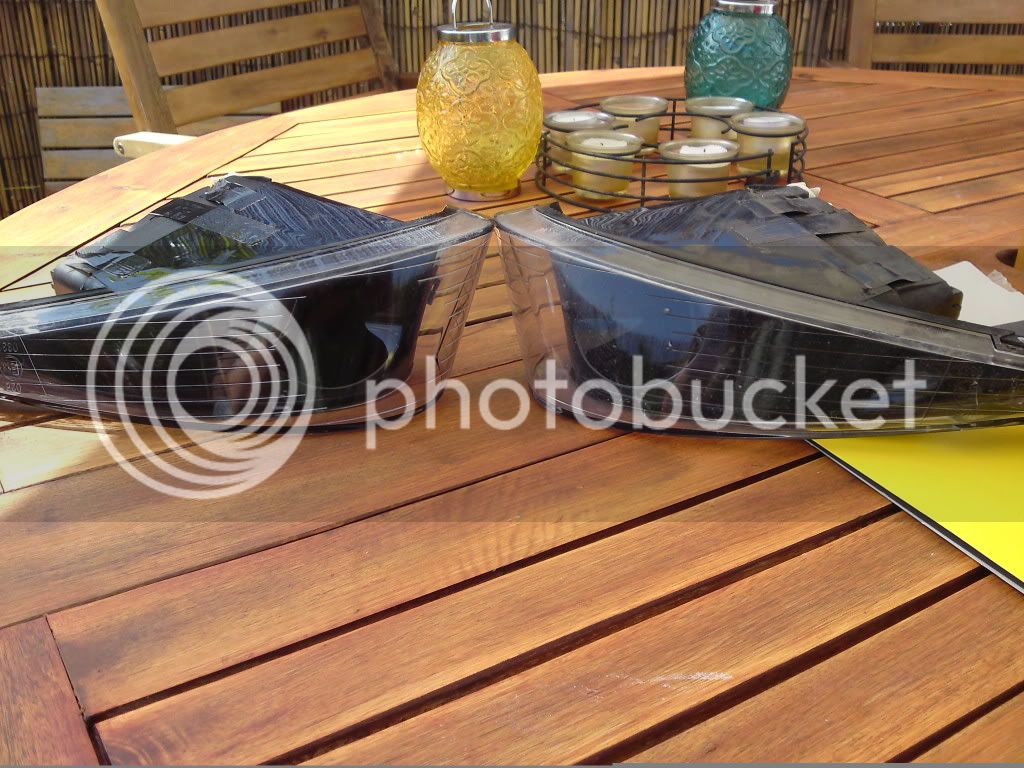 The lights were then cracked apart 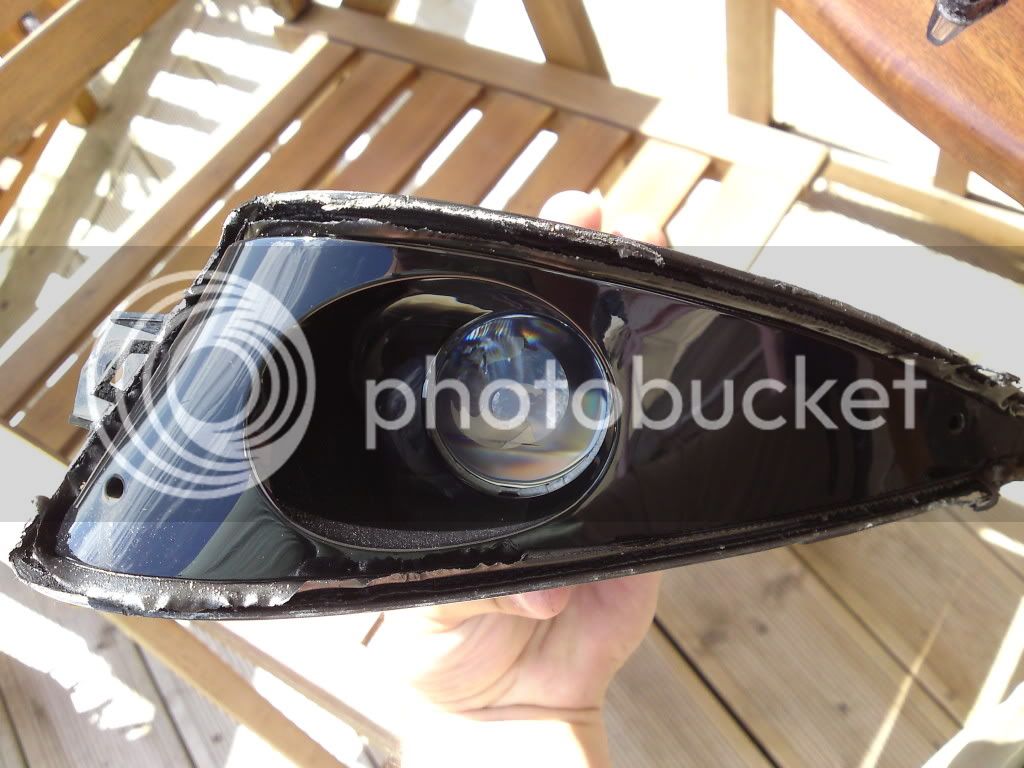 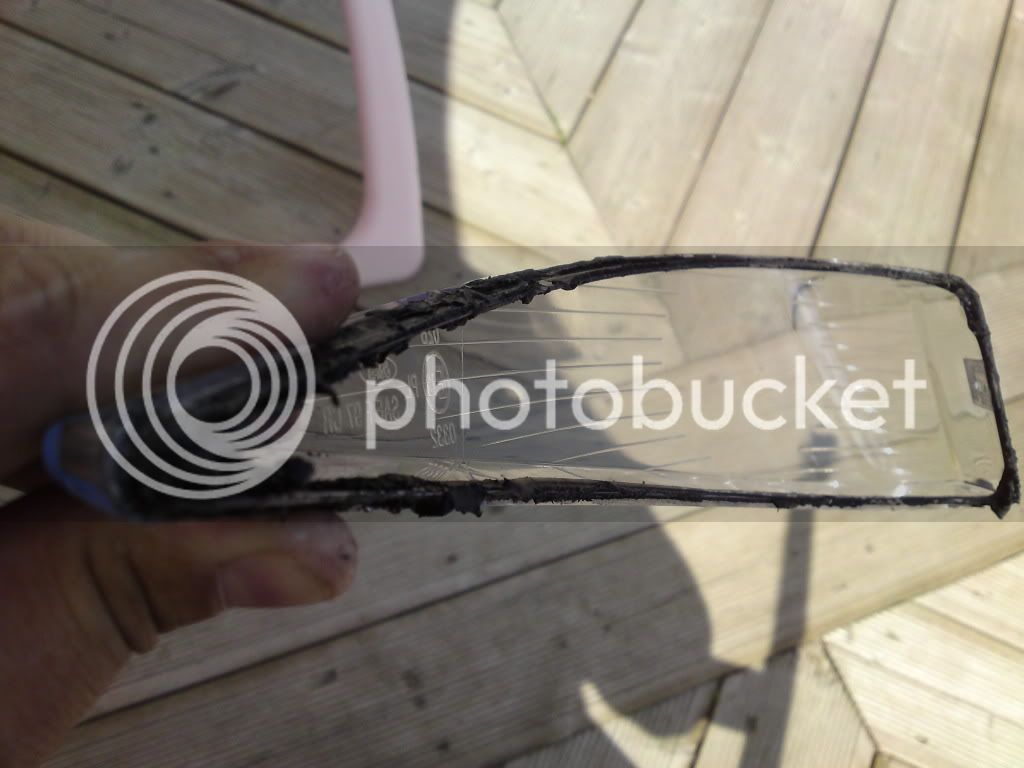 It was at this point that I thought to myself, no point in me pursuing my other idea for some running lights, I might as well copy Lewys idea.
Thus the lights are currently sitting in my shed waiting some running lights to be fitted before being put back on the car.

The running lights is Lewys idea so while I admit I have stolen his idea, I will NOT be posting up any photos until AFTER Lewy has done his and posted up pictures and details. I in no way want to step on his toes as this idea is his little project.

All in all the 2nd fog was much quicker to do than the 1st one as I knew to jump straight in with the 240 grit.
In total I would say it took me about 5 hours from removing them from the car, to sitting outside in the sun with a bucket of warm soapy water and sheets of sandpaper to getting them finished.
Knowing that I need to start with 240 grit, I reckon I could remove, do both sides and refit in about 4 hours or less.

If you do attempt to copy this, it is VERY important that when going up a grade with the sandpaper, you rub the whole surface 100%
If you miss a few 240grit sandpaper marks, the more and more visible they will become, the higher and higher the grade of paper you use. Take your time and when you are sure you have rubbed the whole surface down, get a fresh piece of the same sandpaper and rub it all down again for another 5 mins.

Result is well worth it IMHO.

That looks far too much like hard work. Good work Paul.
D

now ... convert them into flashers

Great job there....omg though 240 grit, eek thats scary
I did my headlights recently, lowest I went was 1200 and I was worried I wouldnt be able to clear them back up

paul just recieved my new foglight today and comparing to your pic of your finished light there isnt much in it,so cracking job mate

Whilst installing the LEDs yesterday evening I did notice the lense wasn't 100% perfect. However, I could only see that whilst holding the lense up to the light, looking at a certain angle and looking very closely.
Don't think anyone will be doing that once they are fitted back onto the car

zer0
1200 grit on my headlights wasn't enough. IIRC I had to go down to 800 grit and even then there was a whole lot of rubbing.

Someone metioned something about removing the protective covering but to date, after a wash and wipe the headlight looks just as good as the day i did it.......realy must get round to doing the other side. Will prob do that while the car is in the bodyshop. :angel:

if only i had the patience to do that........bad enough iam going to go out and buff down rear subframe

I spoke to Lewy and he didn't mind me posting these up.
His will follow soon and it will be good to see a comparison as he has used SMT LEDs so the strip should be even less visible than mine as mine are quite bulky....allthough I can only see them if I look for them.

These were very quickly knocked up last night and are now back in my kitchen waiting to have some gutter seal applied over the joins to make sure i get no fogging issues, and also waiting for my new front bumper before they get installed properly.

Photos were taken very quickly also, as her indoors was having a strop about me and modding my car .... sigh 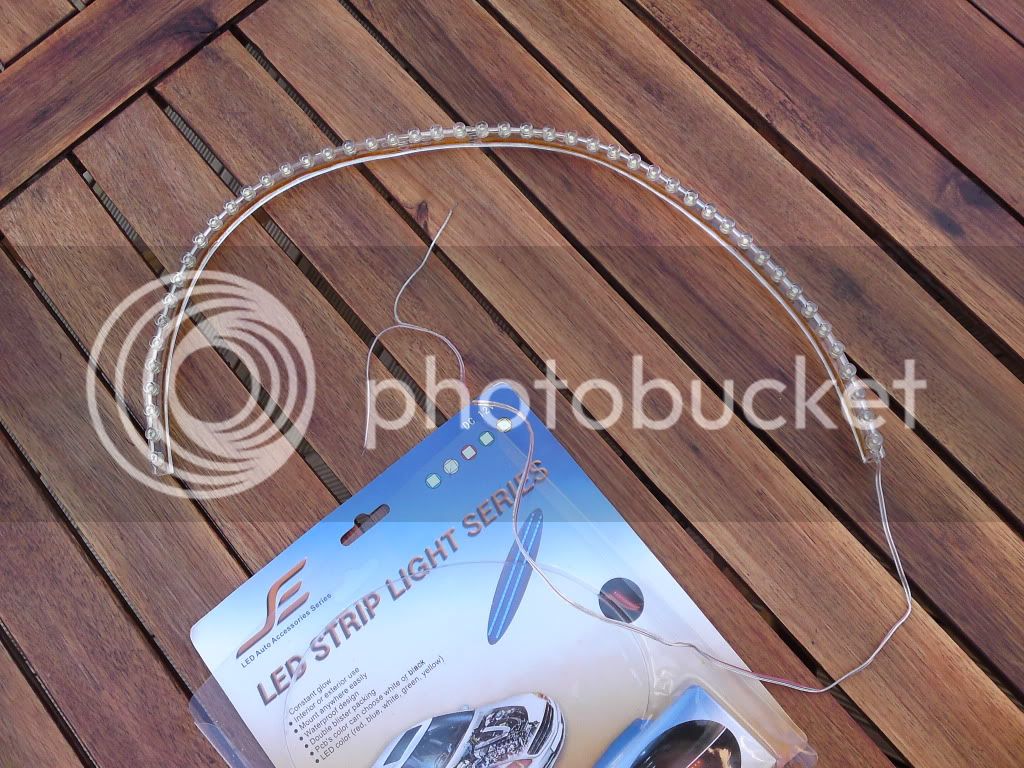 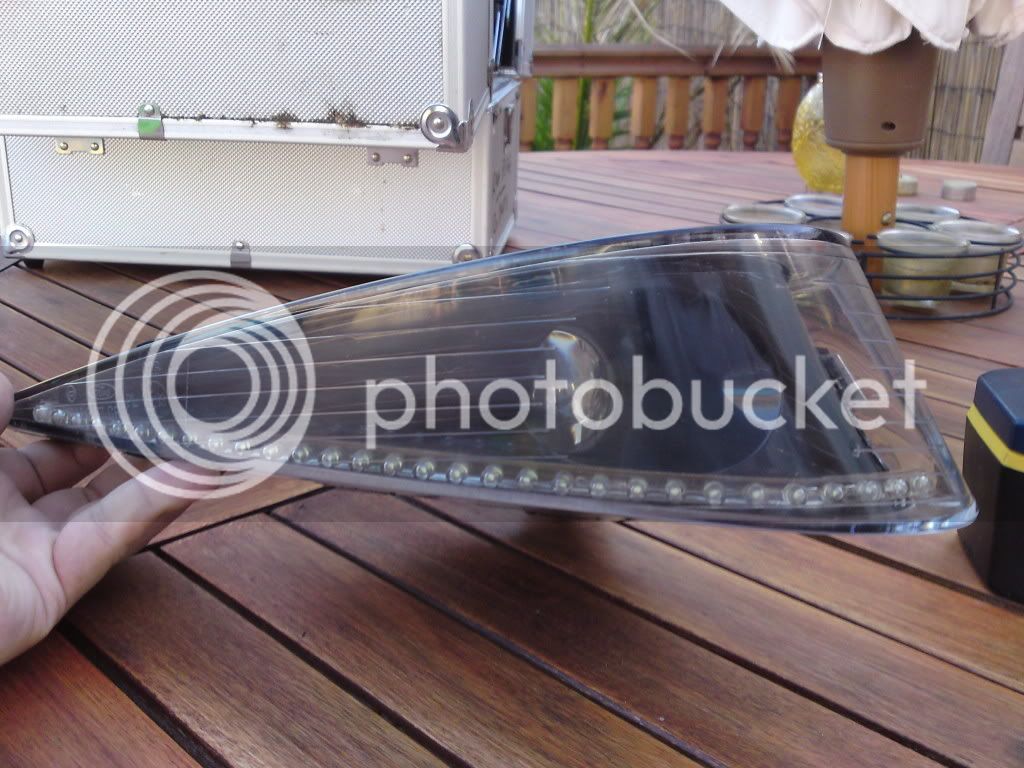 I need to take a photo of the fog lights on the car, but the running lights turned off so you can see how visible the LEDs are.......not very is the answer! 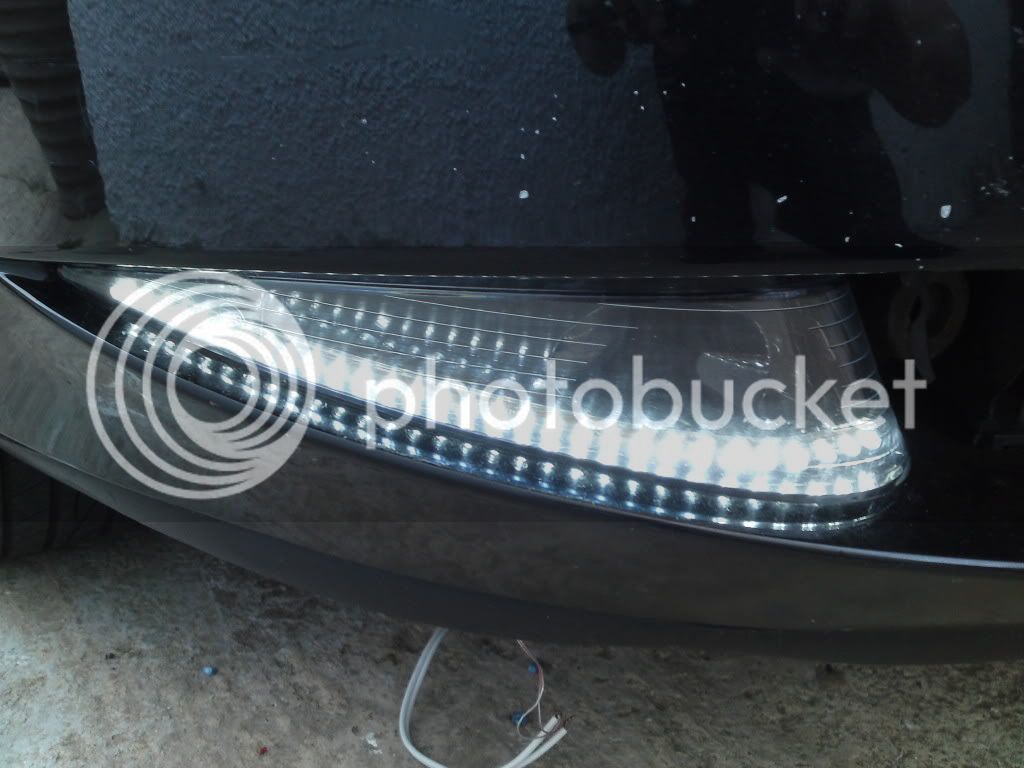 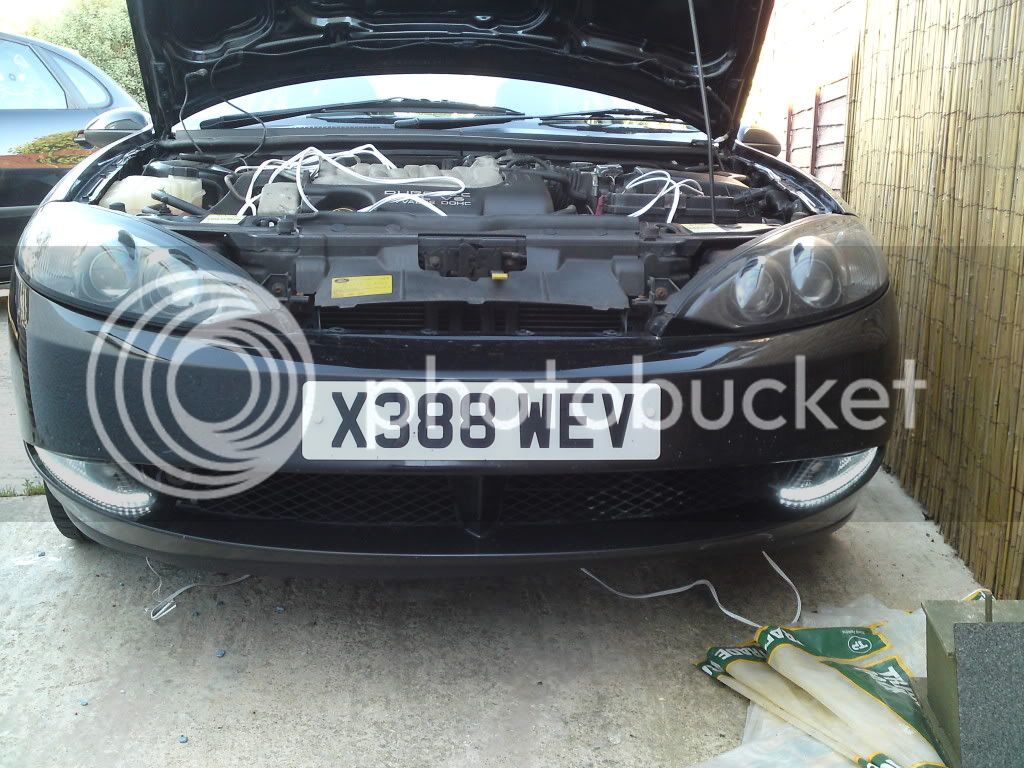 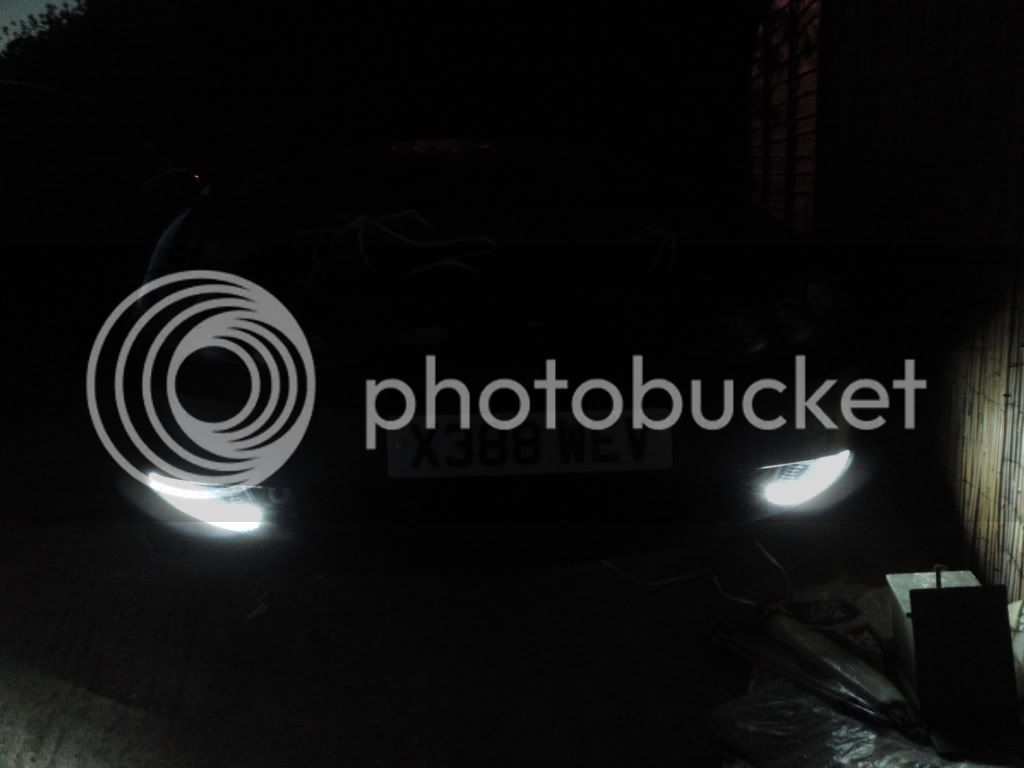 The picture below just shows why i need to change the OE sidelight bulbs to hyper white LEDs.....which i have just ordered 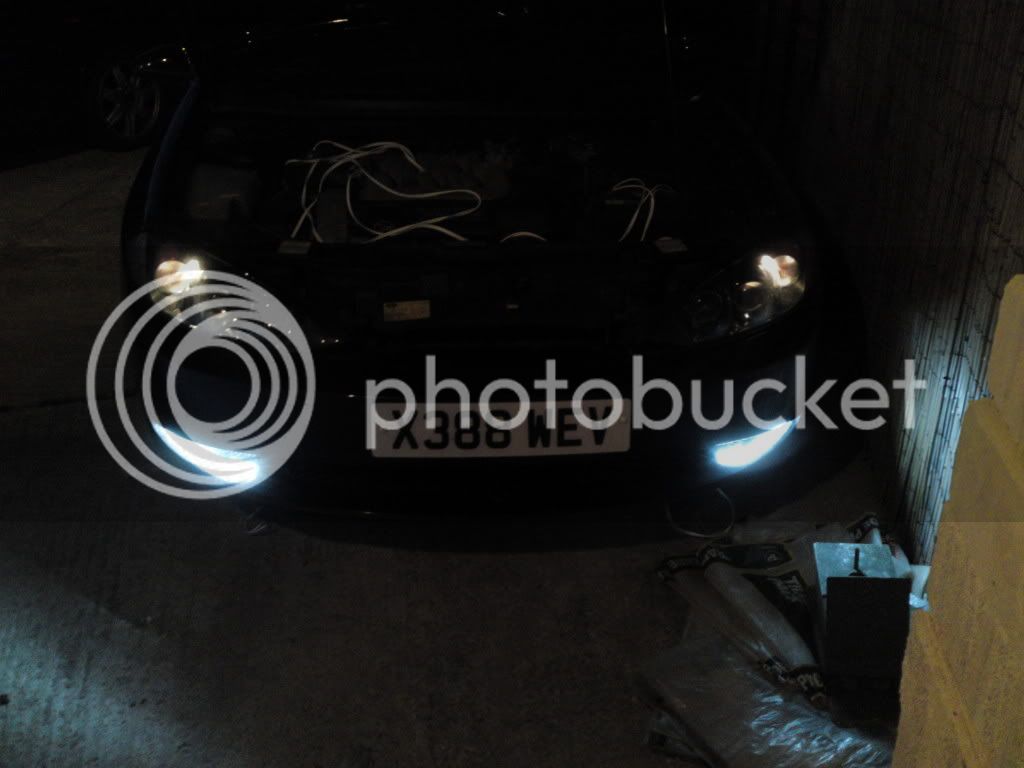 The pictures really don't do them justice. They look 100 times better in the flesh. Much brighter than our pathetic OE side lights, that's for sure!

So a great big thumbs up to Lewy for his idea, and i am looking forward to the results he achieves with his SMT LED's.
For me, I'm 100% happy with these bad boys

Here are some daytime shots with them switched off... 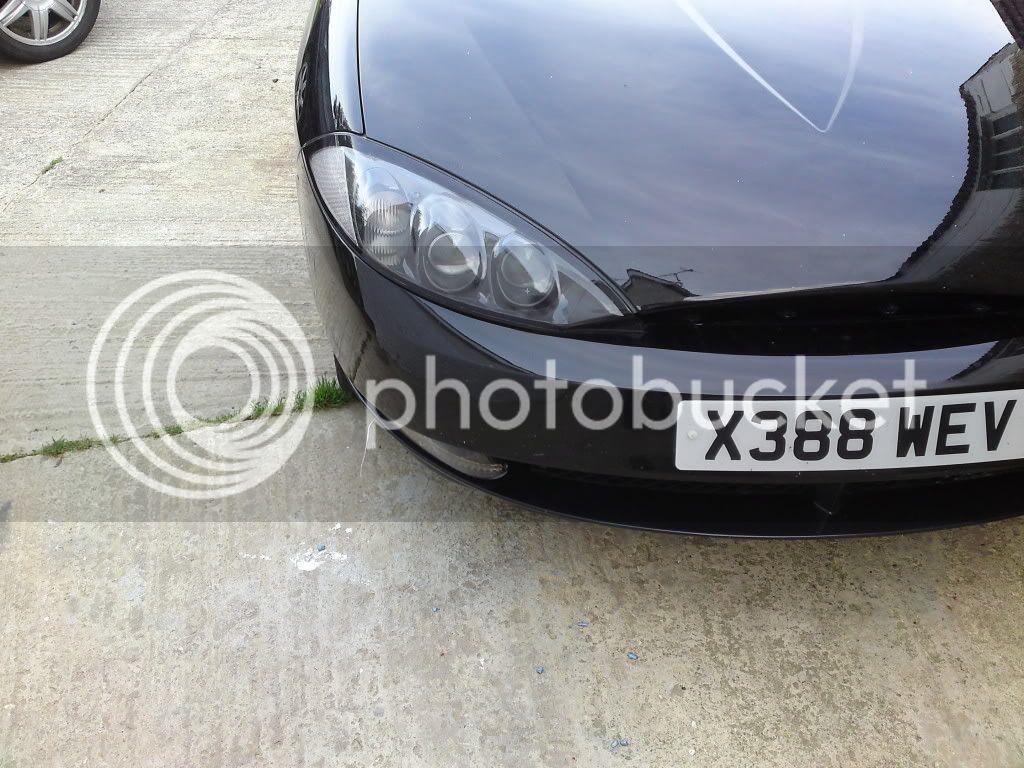 And this is me kneeling down... 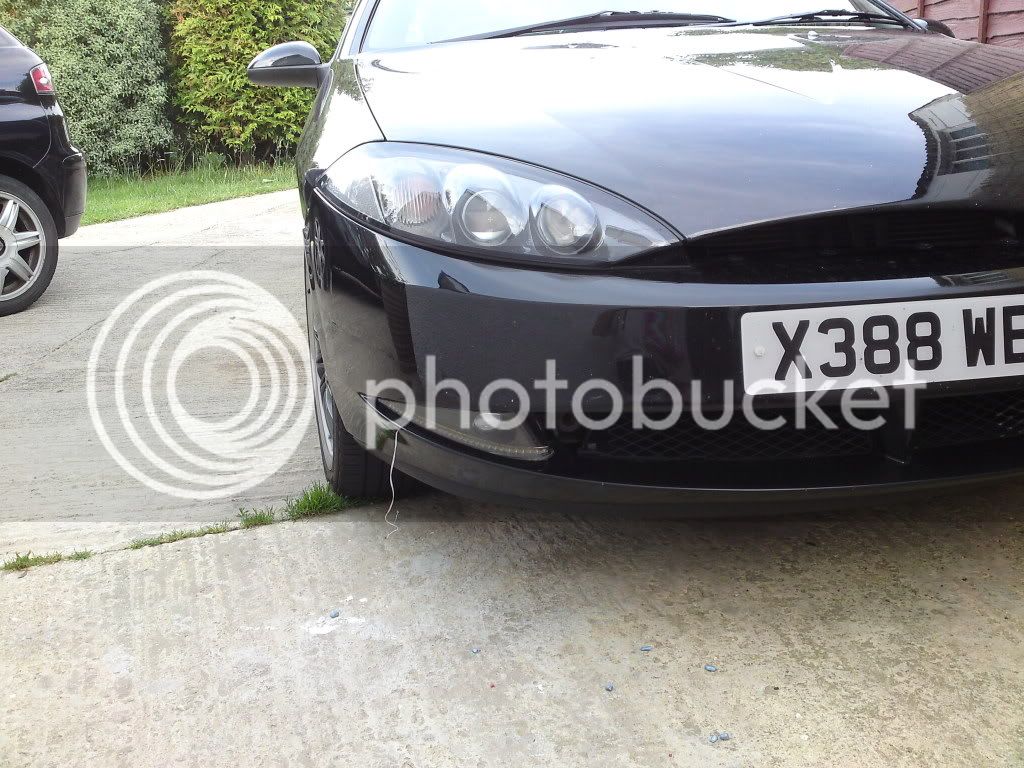 Me likey. Me likey LOTS! 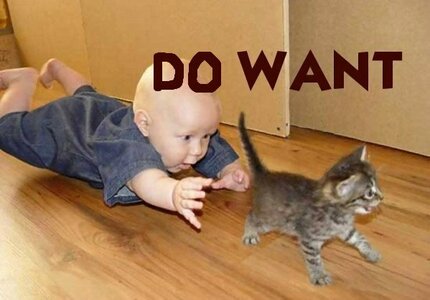 All credit goes to Lewy for thinking of this mod

Mate, you have done one hell of a job with those. Looking great. Don't think I'd have the patience to go through all of that...would rather just buy a new set! lol (sorry, but I'm a bit of a lazy bee!! lol)

Great work Paul. Shame mine hasn't got fogs, i wouldn't mind having a go with them. Mmmmmmm.......i wonder if they'd go in the headlights :angel:

Looks very good Paul, I've been thinking of Running lights myself (i've heard that from 2011 all new cars sold in Europe will have to have them fitted by law) just to "keep up with the Jones's" yours look similar to the ones fitted to Porsches nowadays, not as bright as the Audi ones (thought this guy the other day was flashing me, but it was just his supper bright running lights as he went over a bump).....not so sure i'd want to start taking my head-lamps apart though (i'm sure you know how much C2 headlamps are)

Tiggernick said:
Great work Paul. Shame mine hasn't got fogs, i wouldn't mind having a go with them. Mmmmmmm.......i wonder if they'd go in the headlights :angel:
Click to expand...

Just mount some in the grills were the fogs would be mate, I've seen some for sale with Black backing so they wouldn't show up

Remember the Headlamps cost about £300 each! (the Fog lights ona C2 are £52 each+) however there is the facility on the lights for a running light mate thats what that extra reflector is on the side, and there is even a bulb mounting hole witha grommet (i've got blue LEDS in mine and DYG has side light bulbs) 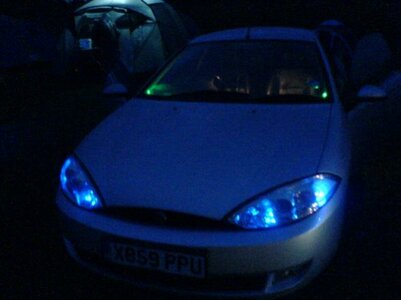