Just bought a cougar - does it have heated seats?

You are using an out of date browser. It may not display this or other websites correctly.
You should upgrade or use an alternative browser.
P

just bought a cougar and its great and thought i'd join as it looks a good forum for help and advice, does anyone know anything about heated seats???

mine has the switches and they appear to be wired up but don't feel warm when switched on, the car didn't have a owners manual so not sure what fuse or relay they run off to check, its a year 2000, has the leather interior, 2.5l so assumed it would have them has it should have the xpack (not sure if this is correct) any help would be greatly appreciated, cheers paul.

if its leather n x-pack then yeah its heated, if its not heating up check a fuse, or connection

I've read they only come on when the temperature falls below certain degree, not sure but 12 rings a bell, someone more technically qualified will correct me if I'm wrong !

Yes, they only work if the ambient temperature is less than 12 degrees.

Hi and welcome to ukcougar.com, your in the right place for all things cougar related, as well as some crazy banter. You will also be able to find all the fixes you need in our subscriber sections. Have a browse around the open forums and get a feel for the place, maybe pay a visit to the OFS. Remember! ukcougar.com is the only workshop manual for the big cat.

hi and welcome to ukcougar.com have a browse around the forum and see what you think,its worth subscribing as this allows you to access all areas and could save you a packet on repair bills etc and why does everyone say x pack? its classed as the vx lol

dont swear martyn lol,i have a standard v6 and a v6 vx

I've got all the brochures and even a price list.
No mention of a 'vx' version, just the X Pack and some other options (heated windscreen, sunroof).

Welcome aboard anyway Paul. Post some pic's up of your coug when you have time.

Hi and welcome mate. Switch the seats on and leave them on. I didn`t think mine were working but eventually you can feel it, like you have wet yourself, which is an analogy that one of the other guys on here used at the time. Try it next time you have a cold morning. 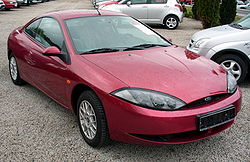 
Main article: Ford Cougar (Europe)
The Ford Cougar is a mid-sized coupé sold in the European market between 1999 and 2002. The car was named after a famous American muscle car from the Ford stable, the Mercury Cougar. It was originally intended to be the third generation Probe, but after a rationalisation of the three coupés available in the USA, the Probe name was dropped in favour of the Cougar.
The Cougar was Ford's second attempt to reintroduce a sports coupé in Europe, in the same vein as the successful but long-absent Capri – the first attempt having been the Mazda MX-6-based Probe. Just as the Capri had been based on the Cortina, the Cougar was based on the large family car available at the time, the Mondeo. It premiered in December 1998 to mixed reviews, partly due to the then-new and controversial New Edge styling – a crisp style which was subsequently applied to most of the Ford range. Unlike its famous forebearer the Capri, Cougar sales were never brisk, despite good reports of the model as a "driver's car".
The Cougar came equipped with the 2.0 L Zetec and 2.5 L Duratec engines with two specification levels, broadly equivalent to a Mondeo Ghia (standard) and Ghia X (simply X).
When the Mk. 1 Mondeo was replaced with a new Mondeo, the Cougar was dropped in Europe. The car's cost and lack of a prestigious badge were among the problems; the success of the BMW 3-Series coupe proved there was a market for this kind of car.
Like its (indirect) predecessor, the Ford Probe, the 1999 Cougar was sold and built in the United States, but in the US it had different branding; in this case being branded as the Mercury Cougar. Ford stopped selling the Cougar in 2002 due to refocusing on the family market.

That may just help clear up some of the misunderstandings about branding of the Cougar marque.

Anyway, Welcome to the home of the Cougar Paul, everything you will ever need to know about your car is just a question away.
K

Welcome to the forum

not to start an argument but on my v5 its states cougar vx v6,also when i insured the v6 they made the mistake and insured it as the vx v6
P

thanks so far, al post some pics once i've got it cleaned and polished, might sound daft but the heated seat switch should it be pushed in to work? reading this manual i've aquired it looks like you don't push the button in for them to work? tar.