Cloud 9 finally enjoying the return of my cat

If the answer is in here and you've not read this thread first, expect to be flamed !! :twisted:


Who are you lot ?
Enthusiasts who like driving a car that has a degree of style & panache, We range in age from about 20's through to 50's and like to meet up for both national and local events.
As we spend more time with our car that most Ford dealerships (who often haven't much of a clue about the car) we reckon that 9 times out of 10 someone on here will have had the same problem / query as you and will be along to share the answer to your query.

What's the difference between Club Membership and a forum user?
Forum users are registered so that we know that they are not pornbots etc. and can post on the New members, General Info and off-topic sections as well being able to read the For Sale.

Club Members have access to the full forum where they share their knowledge and expertise with each other, benefit from Group Purchases, Discount Schemes and can post in the For Sale ads without any extra charge.

How much does a subscription cost ?
£15 per year or £5 per 1 week access pass

Where does the money go ?
Mostly for running the bandwidth / hosting fees as well as public liability insurance and capital expenditure on items when we attend shows such as club gazebos, banner etc.

Is it worth it ?
We think so ... here's a quote from someone who joined last year..

WAS IT WORTH ME LOGGING ONTO HERE....YES IT WAS...
I fixed it myself ! Yea It was the bolts under the Gaitor. Thank you so much for the information. Needless to say i wont be taking my Cat back to Ford anytime soon.

Again Thanks for saving me £600

Total cost of the fix £7 for the right screw driver bit. Bargin!

How do I pay ?
At present we are accepting subscriptions only via Paypal.

Firstly, if you've not done so already, make sure you register on the forum to ensure that your preferred username hasn't already gone.
When you've done this, then go to the following link:

What colours did the Cougar Come in ?

Officially, Colours available in this country were....

One member has a special order Rio Red, another 3 have differing shades of Orange and there was also a member who had a cat (now deceased) in bright Yellow.

The US had loads of colours to choose from but the UK was limited to the ones above. The continental Europeans also had quite a nice choice too.

What's an X-Pack?
An option on V6 models only, it had leather seats, heated on both fronts, electrically adjustable for the driver, a CD-changer in the boot and metallic paint at no extra cost.

What are the main differences between a Cougar 1 and a Cougar 2 ?

From the outside, the front grille, alloy wheels, bumper and headlights
From the inside, the dash.

Don't ask anyone which is better as you'll only get biased responses !! 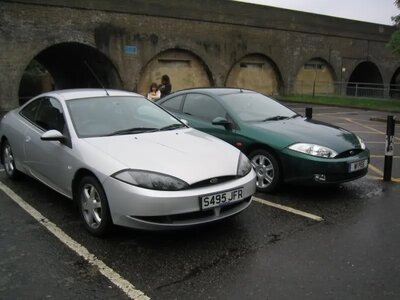 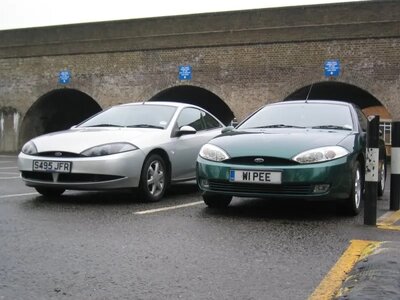 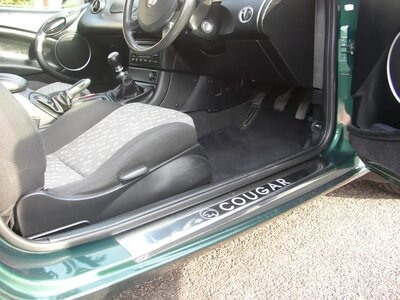 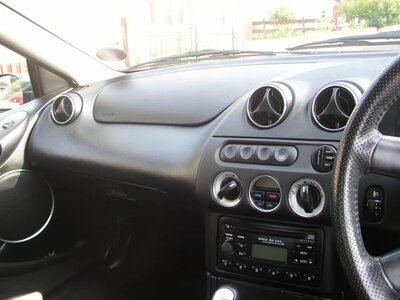 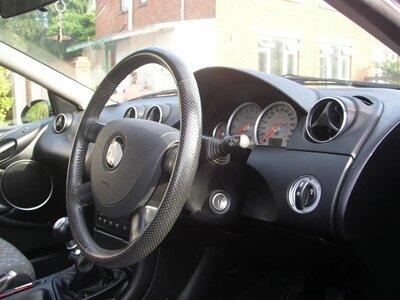 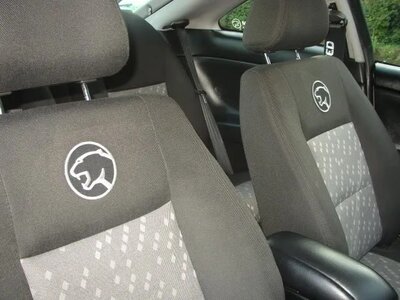 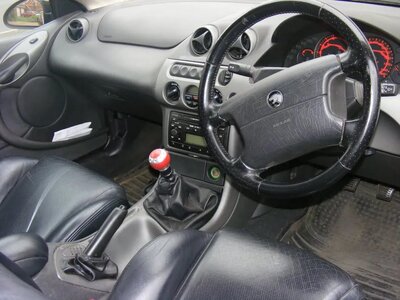 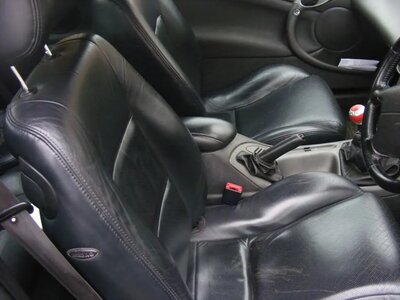 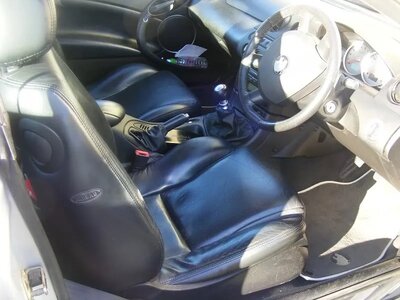 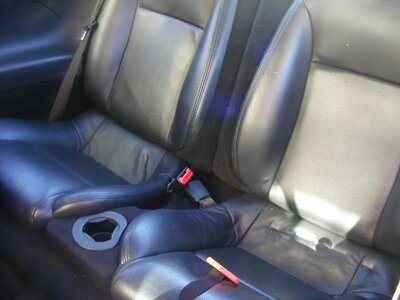 
What variants are there ?
In the UK there was the choice between a 2 litre 16 valve Inline 4 cylinder engine (Zetec) and a 2.5 litre 24 valve V6 (Duratec)

Elswhere the 2.0 litre automtatic existed, but not in the UK


Can I add Cruise Control to a Cougar without it?
As a factory fit, it was only available on automatics. It has been fitted to a manual gearbox by at least one member on here, but you need to understand that you will need to get the parts from a Mondeo to do it and it will only work after you've selected your gear. Other members have reported it as 'a bit jerky' and an option that even if fitted from the outset, doesn't get used much.

CC on a manual car is risky, because most people who'll buy them have no idea how it's works. With an auto the CC can have full control of the speed from zero to maximum speed. On a manual it must work within speed range for that gear ratio.

Too many people would either stall or red line a manual with CC unless the CC is designed with electronic limits reading off the gearbox, which is a LOT of work to get working properly. Don't forget if you encounter a steep gradient with CC it can down change with an auto. On a manual it would just labour and wreck your engine.

Why has my door trim got annoying spots on it ?
The trim corrosion is very common. The trim is aluminium with a rubber coating and its is widely believed that it's the aluminium underneath that's corroding. People on this forum have tried many things; polishing, painting etc. with varying degrees of success. Removal & replacement is not too difficult other than actually sourcing the replacements.

Is the car basically a 2-door Mondeo.
Not really no.
Whilst the engine was shared across the 2 marques, much of the other stuff wasn't. Suspension / lighting / trim etc. are all pretty Cougar-specific and the boot on the Cougar is huge.

What can I do to give the car a bit more HP ?
To start with, you have to remember that despite its looks, the Cougar was never meant to be a platform for stupid engine tuning mods and that it is better thought of as a cruising / touring car than a 'lets race a Saxo boy' from the traffic lights.
So you can carry out some tuning on the 2.0 litre (basic things such as induction kit, 4-2-1 exhaust manifold, sports cat, cat back exhaust, bluefin and maybe some fast road cams but see the specific sections on the forum), but both will respond well to a change of air filter, and it has been known for a V6 to have had a supercharger fitted for one of our members and apparently in the US there are turbocharged examples too.

A custom made exhaust (see the forum for recommendations) can also free up a little more oomph.
The V6 can also benefit from being converted to run on parts designed for the Mondeo ST200 with changes to the inlet manifiolds etc. and it has been known for a 3.0 litre engine to have been dropped in.

What is the top speed / acceleration / fuel economy like ?
According to the official figures:-

I'm a bit of a geek, where can I find lots of other stats like kerb weight, headroom, legroom and gear ratios ?
Its all on the Tech Spec page ... http://www.ukcougar.com/techspec.htm

What problems do I need to look out for ?
The V6 has a well known design 'feature' that means that you mustn't let the oil get too low otherwise you can end up starving 2 of the cylinders resulting in some damage. This is easily diagnosed by listening for a loud tappet-like noise on start up.

The V6 may not accelerate as it ought to as it comes under strain at around 3250 - 3750 revs. If it fails to pull properly then you might have a problem with the IMRC box.

What is an IMRC for ?
Opens the secondary ports in your LIM (lower intake manifold) at around 3,500rpm to allow more air flow:

The butterfly valves in the LIM are kept closed at lower rpm's to keep the torque higher. But then its more beneficial power wise to have them open at higher speeds/rpm.

Also if you dont feel a kick at around this rpm and you feel like your high end power is poor then theres a good chance your IMRC is faulty.

How do I fix an IMRC ?
See details in the subscribers sections.

Can I fit a child's car seat in the back ?
Yes. Many of us have without a problem at all.
If you only need to do one, then (if you have electric driver's seat) put it behind the passenger seat as it is easier to get in & out.

What Oil should I use ?
Stick to the recommended 5w-30
The Ford Formula E doesn't cost that much more than other brands and is made to match the engine (or vice-versa).

Why can't I use something else that's cheaper, like 10w-40 ?
In essence ... Cold weather and/or good engine - you want thinner oil

Oil thins considerably when it reaches operating temperature (and by implication it thickens considerably when it cools). The engine (oil pump, oil galleries, all the bearings, bores etc etc etc) is intended to be effectively lubricated by oil at a particular viscosity. In this climate, that viscosity is afforded by 5W-30 for our engines. Once up and running and full temperature, the engine is pretty well lubricated by either oil named here. The difference is the viscosity of each oil when stone cold in the morning.

The 10w-40 is a lot thicker than the 5w-30 when you first start the engine. This means that the 10w-40 takes longer to reach a safe viscosity as the engine warms up (little to do with thermal mass or heat transfer - it's because the 10w-40 has more "thinning" to do compared to the 5w-30).

The real problem is when people start the car up cold and start using throttle and/or revs. This is essentially an partly-lubricated engine under load. Naturally it's life will be drastically shorter than an engine gently warmed up before heavy use.


Where abouts is the internal fuse box?

The fuse box is behind the glovebox.
To access it easily, empty the glovebox, you'll see a 'flap' at each side of the glovebox at the top, push these at the same time & the glovebox will 'drop down' (hence emptying it first!!).
You will then see the fusebox attached to the bulkhead, there is a clip on the top,
release this & the cover will drop down allowing full access to the fuses.
Last edited by a moderator: Mar 14, 2021