Our MX-5 was a bit overdue a service so we gave it a darn good seeing to yesterday. Parts are about on par with the V6 Cougars I had, although we spent more on oil this time because the gearbox and diff oil are separate (and different) and need changing every 54,000 miles. Then of course there's the timing belts which are scheduled for every 54,000 also, compared to 100,000miles for the Zetec IIRC? (Ignoring the plastic idlers which cause early failures on Zetecs).

Anyway, you'll see from these that compared to the Zetec Cougar, access to the timing belt is excellent. The downside is that you have to remove the rocker cover to get to it You'll see the variable valve timing gear and oil feed on the inlet cam there Another downside is that the oil filter is hidden under the inlet manifold with fairly poor access.... definately not one to overtighten because you'll never get near it with a tool of any sort. Fortunately ours was (and again is) handtight.

The fuel filter likewise is a bit of a sod - and infact whilst under it getting unleaded pished all over me, I learned that the new filter doesn't come with clips so you're lying there with a fuel tank emptying itself on you whilst you faff about trying to carefully remove a pair of plastic clips from the old filter and fit them to the new one :evil:

Lastly, the gearbox has no access to get a 1litre bottle above the fill hole, so we cut about 4 feet off our garden hose and fished it down through the engine bay, and Gill filled the gearbox from above. The diff was a lot easier

It's driving great now again - what a difference

Here's a couple of pics 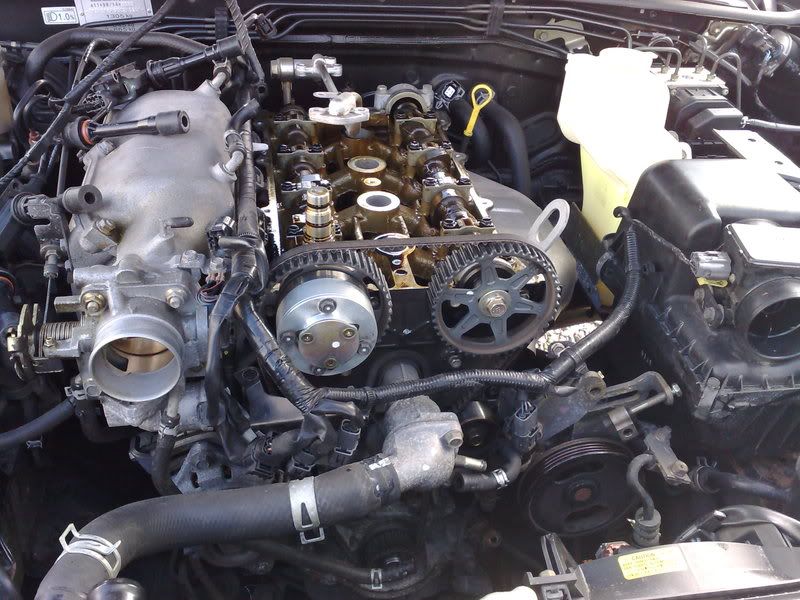 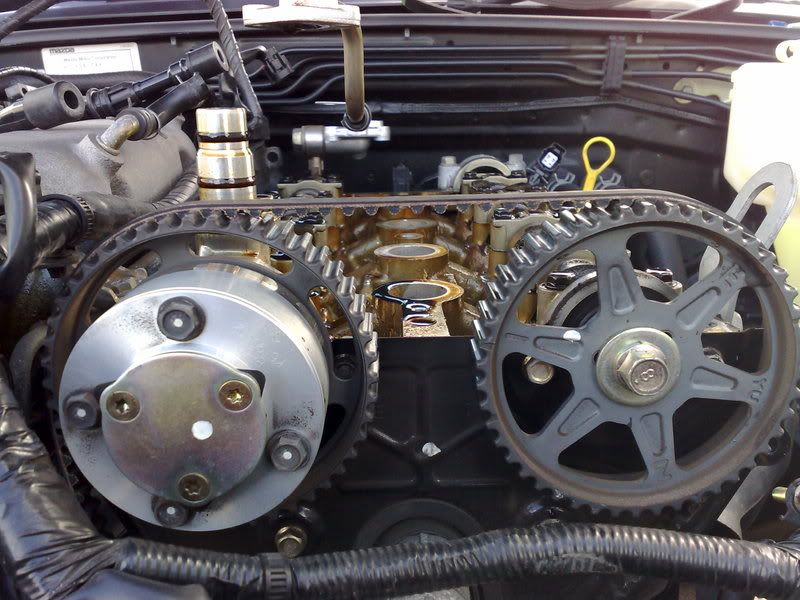 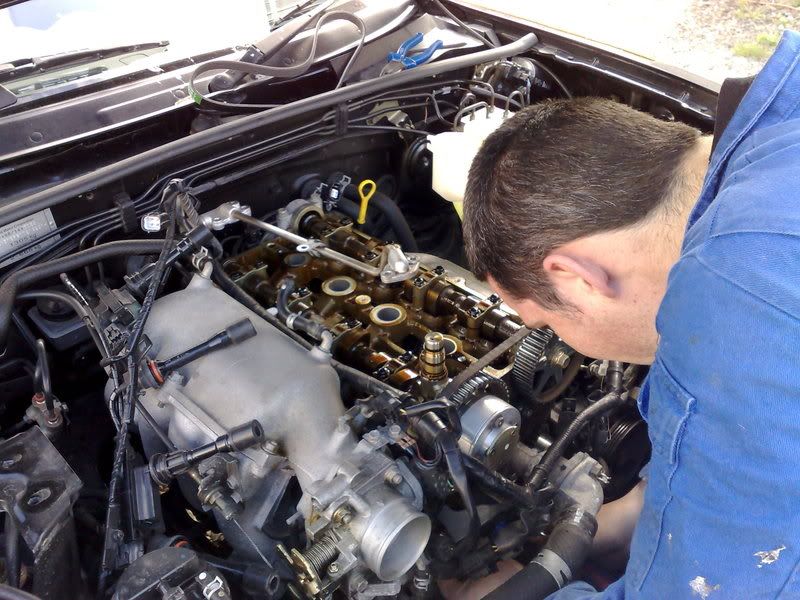 The more observant amongst you may notice that I cheated with the timing belt and cut it in half round the circumference by giving the engine a couple of turns on the starter motor. I then slackened the tensioner, removed the "front" half of the belt, fitted the new belt, then chopped the "back" half of the old belt and removed it before sliding the new belt fully home. The tensioner and idler were then changed one at a time and job's done. No faffing about looking for timing marks etc
P

Good work Jamie, looks difficult Bet Gill panicked a bit when the engine was being taken apart, she does like her little Mazda

Who Gill? Never! She did most of it
P

Now that id love to see

Good work Jamie, I especially like the idea of pushing the old belt off with the new one, now why didnt i think of that

You clearly lack my tendancy towards laziness Alan

It was actually something I read on some other forum a couple of years ago but never had the opportunity to try. I can't claim credit for the idea but I did try it and it works.

I felt easier trying it for the first time on the Mazda engine because it's a non-interference beasty. Had it gone horribly wrong and my Stanley knife slipped the worst that would've happened would be having to sort out the timing marks again.