Not wanting to steal any of Chris's (cmewes) thunder - I too just happened to have booked this week off. Unfortunately her indoors has said that I can only spend about 25% of my time on the Cat (We'll see about that :ihih - and the rest of the time on the housework that she should have been doing :mad5:.

Before I went I managed to glue down the rear corner of the rear drivers side window which had been sticking out for some time, with contact adhesive and it seems to have stayed put .

When the rain finally stopped I set about Blingin' up the back end. This is not for the fainthearted and the purists may well cry sacrilege - but I done it anyway rrr:

Back end as was 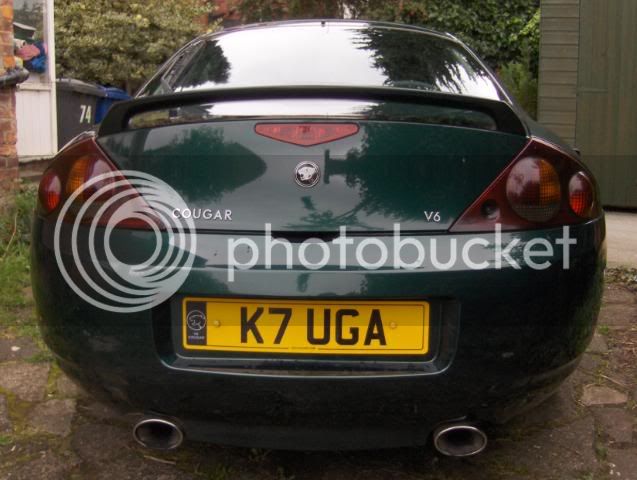 Cougar head badge went a couple of weeks ago as a house warming gift for Rich Elliott - but it's been raining ever since I took it off so this is the first chance I've had to replace it. 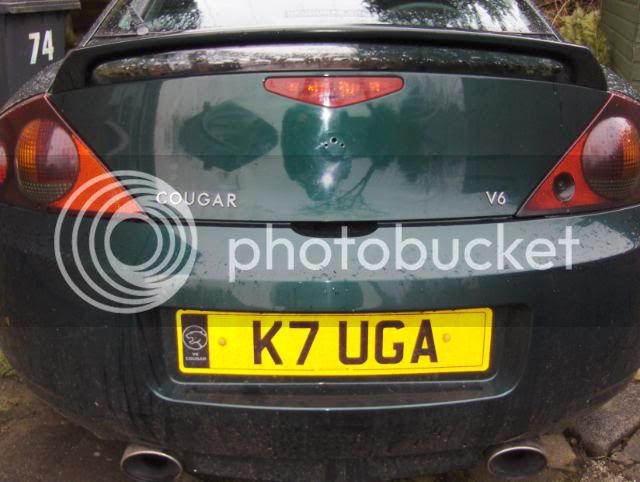 The replacement gold Cougar head was in outline within a gold ring so I had to mount it on a backing to cover the three holes in the boot lid from the original badge. I used a black B&Q value floor tile - stuck it on a bit of that - cut round it with some sharp scissors and stuck some number plate tape on the back. 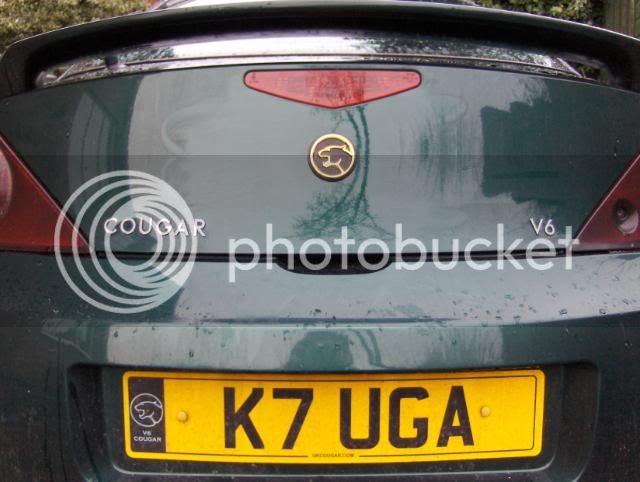 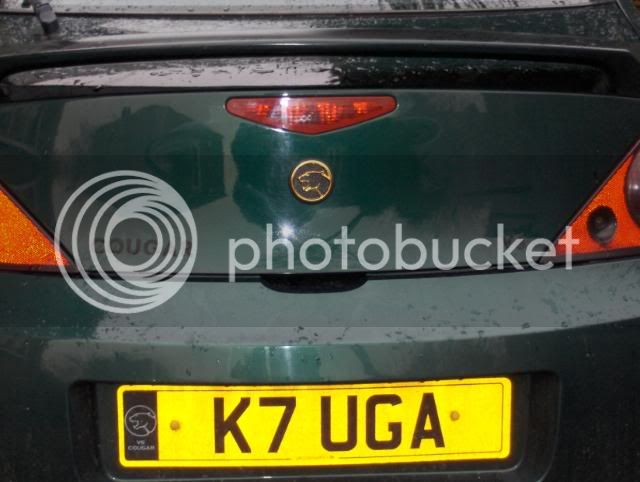 Bit of T cut later and ready for the new lettering 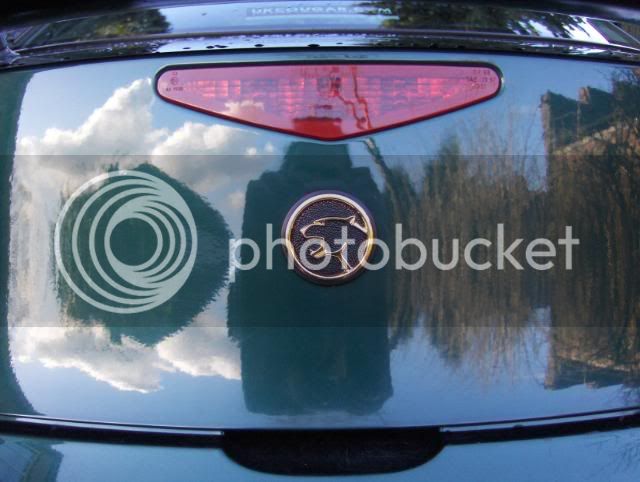 For the lettering I have used Halfrauds lettering - 3 for a fiver so £10 for Cougar. Over the last week or so I have given them a light rub with very fine wet and dry - couple of coats of primer followed by a couple of coats of Ford Solar Gold (chosen as I wanted an antiquey (?) look rather than out and out in ya face blingy look - followed by a generous dusting of lacquer.

Used a tip I got off uncle Al and used masking tape to get a line and work out where the letters were going.

Unfortunately the light was fading by the time I'd finished so the photos aren't great.

A bit too blingy? Maybe but it is a bit different innit :ihih: 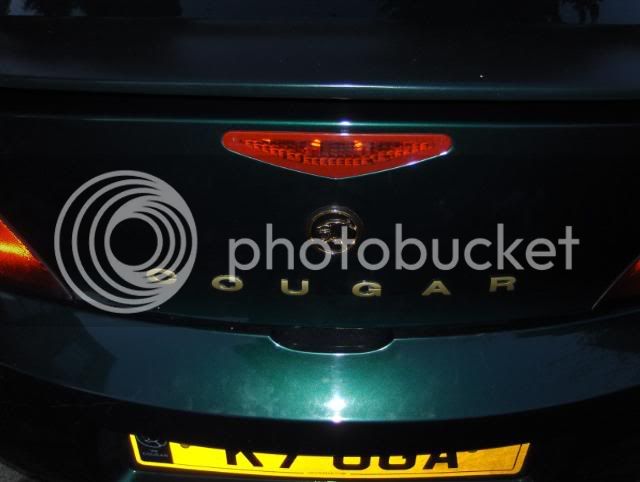 And back to the original pose 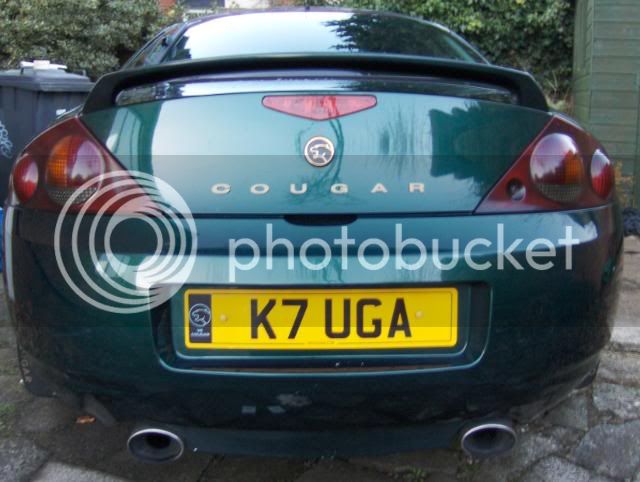 im impressed, not too blingy i dont think

Very nice Iain. Your old badge is now happy in it's new home on my Cat's bootlid, thanks again for that. I've got a new OEM Cougar badge inbound from Payne's (thanks Neil) and I plan to space the letters out like Al's. I'm debating whether to leave the 'V6' lettering in place though, I think I'm going to put the spaced lettering on first then leave it for a week and see what my gut feeling is when I look at it.

Nice bit of diy bling there Ian. Looks good on a Greenie mate

Nice work Iain Green and Gold do go so well together. :yesnod:

It's all going to tie in nicely with the "Green/Gold" look Iain, wait till you get the other bits on

Not sure what's on the agenda for tomorrow yet - depends on the weather + daughter wants me to redecorate her bedroom (fat chance - I have a new 1200w amp to install don't ya know ).


It will do when I get that amp in Mark :ihih:

Very nice Iain, same lettering I used to do the Mercury across the tailgate sits nice on the cougar as it is chunky enough not to get lost.

the gold on green works really well together,dont think it would work on any other colour -thats what makes the green machine unique

JJ said:
Very nice Iain, same lettering I used to do the Mercury across the tailgate sits nice on the cougar as it is chunky enough not to get lost.


Thanks for that JJ. I'd had the lettering for sometime but wasn't sure about it until I saw the 'Mercury' on the back of your cat - and that made my mind up. If you remember I asked you if it was the halfrauds lettering just to make sure.