Lots of people know about this contraption I'm knocking up, and many ask via PM every couple of weeks for the past several months.

Today I did something which made it look, for the first time, like it wasn't going to be a boat 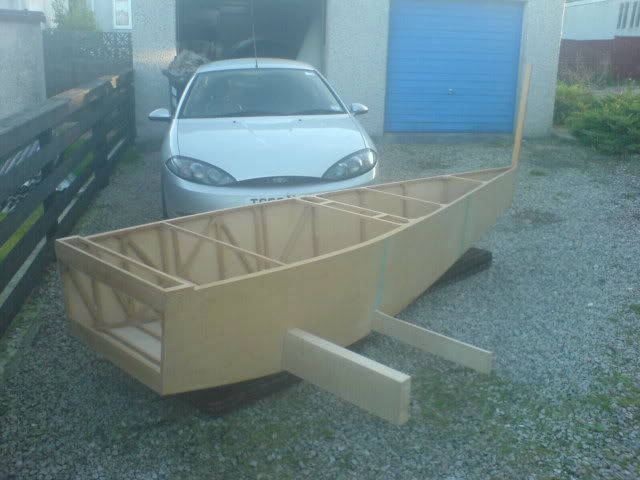 The stub wing spars dry fitted. I spent 5 hours today cutting the holes in the fuselage sides for these damn things. Doesn't look much but I'm so happy they're in 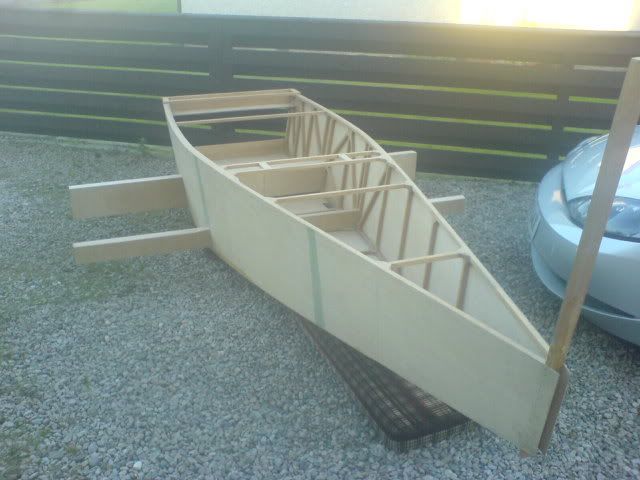 From behind, you might be able to see the chamfer cut on the rear spar. This is so that the spar matches the aerofoil section of the wing which will be build around it. The spars carry all the weigh of the aeroplane. This aeroplane has a design strength of +6g. Those wooden beams will carry 6 times the aircraft's gross weight, or, 2460kg. I hopefully will never need to ask that of my wings! 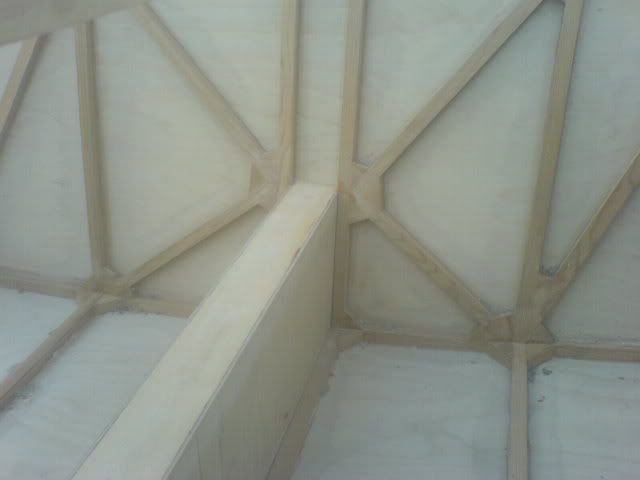 A quick view from inside. The spar centre section runs straight through the middle of the fuselage. The rear spar is just behind your bum, and the main spar sits just under your knees. Load spreaders will be added above the spars to transmit all the fuselage's weight (at 6g remember) to this glue join. The glues used are all epoxy based. All the 5/8" square wood you see is aircraft grade spruce. Note the absence of any defects in the wood. No knots, no grains pulling hand brake turns out the side of the length etc etc. The Plywood is to a standard set by Germanischer Lloyd who govern shipping standards of all things. The ply is 2.5mm thick 5 ply, and again is free from any defects, and uses phenolic resin glues. The ply is tested by boiling for a couple of hours prior to shear testing. This is Gucci stuff. It also costs a fortune. 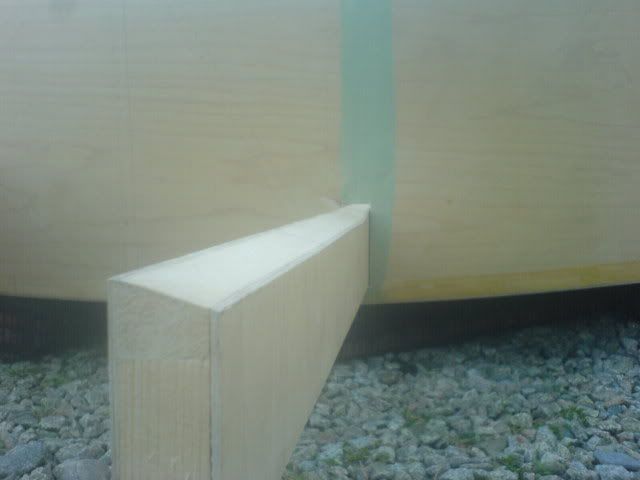 This is the rear spar. It doesn't carry a great deal of weight as such, it's main purpose in life is to stop the wings folding backwards at the 200mph top speed. The chamfer I mentioned is more evident here. Note the smooth transition to square at the wing root. Sharp changes in shape attract high stresses. 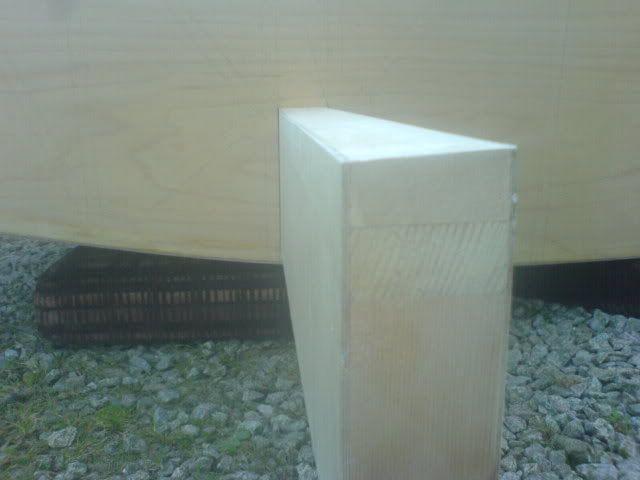 The front spar..... same again, but much much bigger in depth. This is the part which does all the work.


The outer wing panels bolt on via steel brackets bolted to these spars, and are removable for transportation on a trailer.

Power is to be provided by a 2180cc Volkswagen Type 1 (who remembers that engine??) through a fixed pitch wooden propellor.

Instrumentation would make most car people cry so I wont show what's in the loft waiting to go in....


This here is the prettiest example of my aeroplane that I've seen - hope mine looks as good when it's finished! 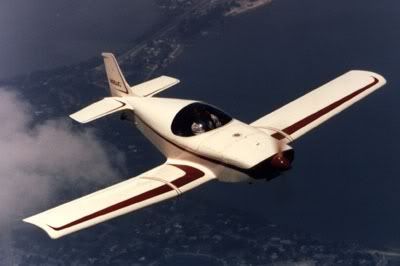 That really is an amazing project. I am lost for words when I see something like this. 8) 8) 8)

Any chance of a Display at next years Cougarfest... 8)

looking really good so far mate, i thought you were building a P-51.

"are you gona put a Cougar Club Sticker in the window"..

Hehe.... I'll build something a bit special one of these years. All money driven though...

This one so far has cost me ?ú3,900 excluding borrowing a van and some diesel to go down to Gloucester to buy a few bits and bobs recently (many thanks to Stewart for the accomodation and curry ).

That has racked up all the woodwork you see there, plus some more in the garage.

All the fibreglass panels which make up the engien cowlings, top deck and canopy frame

Main undercarriage (and tailwheel, but it's not big enough for grass so I'm going to get another one at around ?ú200)

Engine (VW 2180cc as I said. I have dual plug heads on it, but need to get a 2nd ignition system)

Wings are finished and hiding in the garage

11 gallon Aluminium fuel tank (should last about 3 hours, or 450 miles)


I still need to buy:

Some plywood, seatbelts, bigger tailwheel, 9oz BID fibreglass cloth, resin, filler, lots of paint (all but 1-2 coats will be converted into dust :? )
And of course, my first registration. G-DUFF is still available on the civil register. Anyone wanna sponsor me??


The bolts to hold those brackets on are on their way across the Atlantic. Actually they're probably at Gatwick waiting for HMRC to faff about for another week. 52 bolts to hold the wings on (2460kg ultimate load remember) plus those to hold the wheels on came to ?ú55 including postage. Gulp.


Overall - this aeroplane will fly, legally, for less money than I paid for the Cougar. The difference being that I've lost around ?ú5000 in 3 years of ownership with the Cougar, but in the same time to plane will be worth pretty much the same as when it's new :wink:

Overall - this aeroplane will fly, legally, for less money than I paid for the Cougar. The difference being that I've lost around ?ú5000 in 3 years of ownership with the Cougar, but in the same time to plane will be worth pretty much the same as when it's new

that looks brilliant jamie, hats off to you for a job well done, be good to see the pics when complete

Tends to need long parking spaces to stop in. About 450 yards long

Not a lot of shopping space either! Bit like an airborne Lotus Elise

I'm gutted that it's piddling down with rain today. I had hoped to do some glue sniffing

Well I was in the mood so I had to do something today. Couldn't do anything directly relevant so instead I did this: 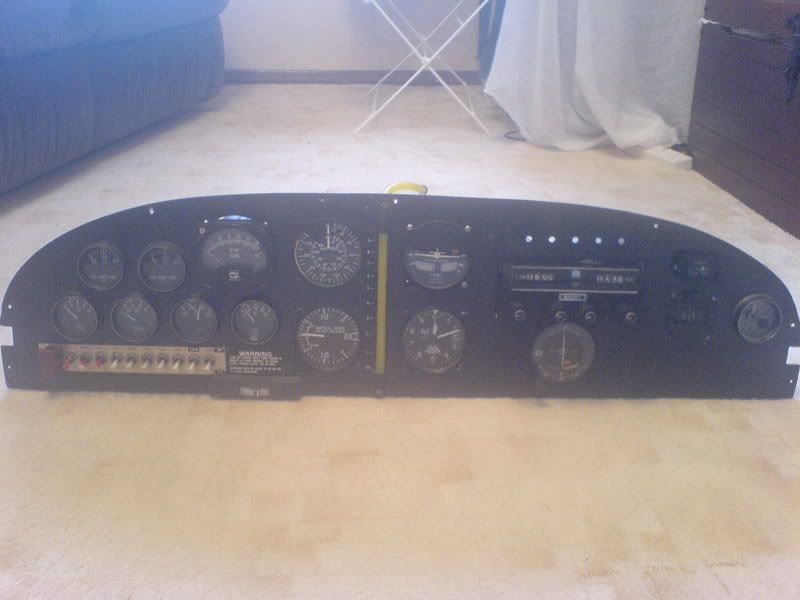 Wish my car had all this information on it :roll:

I also found a pair of 4 point harnesses. Result - they cost a couple of hundred each and I wasn't looking forward to paying a few hundred quid for seat belts
K 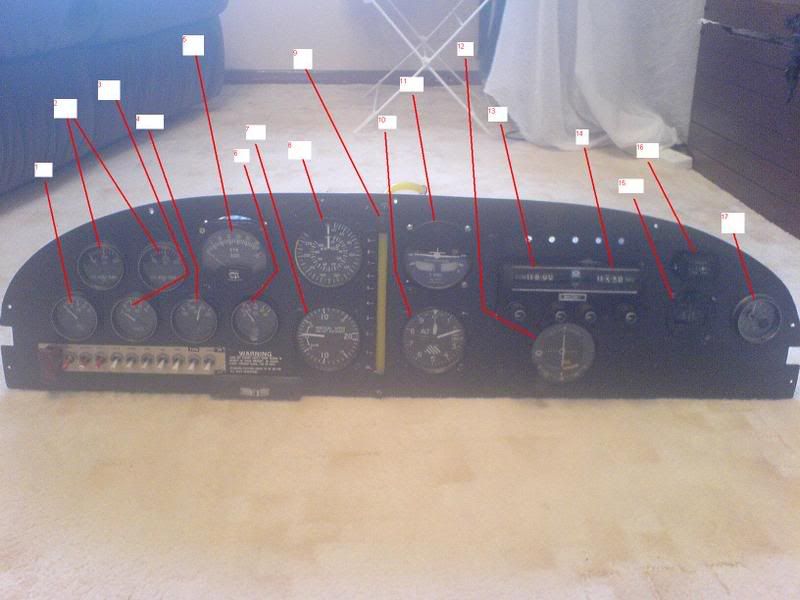 6. Oil Pressure (how cars can been sold without this VITAL instrument I do not know)

7. Vertical Speed Indicator (How fast you're climbing or decending)

8. Airspeed Indicator (How fast you're going through the air - crucial)

10. Altimeter (How high you are above sea level, assuming you have the correct atmospheric pressure dialed in :wink: )

11. Turn Coordinator (Shows angle of bank, and any side slip)

15. Magnetic Compass (remember to convert to grid for navigating!)

17. Clock (so you know how long you've been flying for, and how long you have to go until the next landmark when navigating)

KingRoderick said:
Define "did this"

Built it you cheeky sod!

There's a mass of wiring and tubing behind it Need to rearrange it I think. Can't test it either until I bolt the engine onto the front of the plane and connect the battery up
P

Impressive Jamie, Di wants to know who is going to test pilot it ? that was after I reassured her it was`nt a boat, and no you were`nt expecting a lot of rain. :wink:
B

Seriously though, it will be a good friend who incidently gave me my first flying lesson at the age of 12.....he's currently a Captain for CityStar airlines (a small outfit), but he was a 757 captain with Britannia years ago, then flew for British Air Ferries doing the Shetland run, then later with Brymon and into British Airways Citiexpress.

I helped build his aeroplane donkey's ago, I built the engine in his current aeroplane and spent a day with a respirator crammed down the inside of his same current 1946 built Cessna 120, spray painting it with zinc chromate so to prevent corrosion (American import).

He's an ex-aerobatic instructor and is currently on the PFA's list of flying coaches. He volunteered right at the beginning to test fly my aeroplane, then carry out my tail wheel conversion and check me out in the thing.

If I would trust it to anyone, it would be this guy :wink:
P

excellent mate, failing that I will kidnap one of the Red Arrow pilots from Scampton for you. :wink:

What if they get a bit carried away???

Dave mentioned the club sticker in the window......

In short no, but if someone can make me a pair of vinyl stickers of the Cougar head logo about a foot diameter then I'll stick them on the tail
P

jamie_duff said:
What if they get a bit carried away???
Click to expand...

make sure those wing bolts are extra tight. :wink:

looking realy good jamie, only wish i was as technicaly minded, always fancied a helicopter.
S

Can I book a flight in your plane?

Anyone who wants to can - there is a catch though

One of the reasons this aeroplane is so fast and yet within my budget is because it is very small and light.

The seats are behind the centre of gravity hence (to put the seats on the CofG and have leg room would need an aeroplane a good 5-6ft longer, and consequently about half again as heavy, which needs more building materials and a whole heap more power = bigger engine = more expensive = drinks more fuel)

The long and the short of it is this thing can just about manage to carry 22 stone of humanity and still be within CofG limits. The gross weight is 900lbs and I expect the empty weight will be 520~540lbs....