What Have You Done to Your Cougar today?

Looks green to me

. Bargain that one Andy.

Is it just green in colour or is it an actual "green" filter?

Quicksilver said:
Me too; that's on top of our garden wall.

LOL Stop it - you're killing me over here!

But I mean seriously, I can see why he thought that. That's a sexy wall and I would totally have it in my kitchen. Rest my hot bacon on it.
Reactions: Quicksilver
M

Sort of Cougar related, I moved mine off the drive today Because.....
We took lil Suzi out for a spin. Around 15 miles from home and a little out in the sticks I noticed the clutch pedal feeling strange. 20 minutes later and I had no clutch. Managed to crash change her home. Had to stop a few times at traffic lights . Restarting meant. Engine off, into second start engine. She’d just about chugg into life and then I could select 3rd and 4th.
Mrs Mabo was close to a coronary next to me, our jolly jaunt suddenly became much less pleasant for her. For me it was just a little challenge.
Got her home, moved Cougar, a neighbour helped me push her into my garage. 30 mins later I’d got the trolley under the front cross member, lifted her enough to get the ramps under the wheels and confirmed my suspicion that the slave cylinder had blown. Hydraulic fluid onto the front prop shaft. Undo the hydraulic pipe, 2 bolts and she was off. New one now on order. £30.00.
One of the reasons I like the car is the simplicity. Couldn't do that on a Cougar in less than an hour.
Reactions: dandamano and backseateducation
W 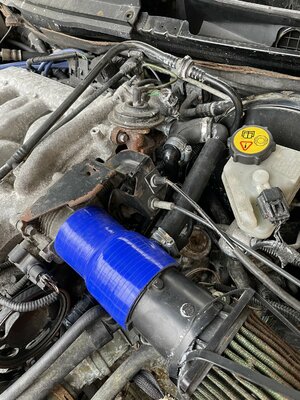 Got this bit of pipe to remake the vacuum hose, bit too long, and I need another clamp, but it’ll all come apart again shortly got the 200 UIM. Also fitted rear brake pad and calliper retaining pins and finished the ABS sensors, going to have to redo one of the connectors as it’s borked. But 3 things off the list and one added, not bad!
Reactions: Foobar and backseateducation

Started to clean the engine bay, covered in sanding dust from when it had the respray in December, needs going over again when weather permits then out with the Autoglym rubber and vinyl shine

Without doubt the best thing I’ve done to my C1!
I’ve been on the hunt for a C2 steering wheel since last July and found this by chance on eBay. It is, in my opinion, so much more tactile the the original wheel and it’s got that great big Cougar badge right in your face - love it

I’ve actually driven mine. She’s been roused from her winter slumbers in the garage. She now wears HID dip and mains with LED sidelights and pretty much a full Samco hose conversion, the kit for sale is a lot less than full.
Ironically her first trip was the the dump, in the rear ? Her very own old subframe and the sills I cut off her 18 months or so ago.
I guess it’s a bit like attending for a heart and lung transplant and when your leaving being given a bucket off the removed organs and being told “ can you just dispose of these on your way home “
Reactions: Foobar, HogMonster, David` and 2 others

I've got a C2 steering wheel/airbag from Tiger and I really want to use it. But one of the bolts on the back of Wildcat's C1 wheel is stripped at the head.

I think this is fixable, drillable,, but not right now. I'll need to buy the 90-degree tool.

Hate it though. I want Wildcat to be what she's supposed to be for me.

Chris, I have a 90 degree drill adapter you're welcome to borrow when you’re ready to have a go at it.

Mako said:
I've got a C2 steering wheel/airbag from Tiger and I really want to use it. But one of the bolts on the back of Wildcat's C1 wheel is stripped at the head.

I think this is fixable, drillable,, but not right now. I'll need to buy the 90-degree tool.

Hate it though. I want Wildcat to be what she's supposed to be for me.
Click to expand...

I agree Al, but I guess it's a case of just how much effort I want to put in for a specific benefit.

I love the C2 wheel, but just how far will I go to get it, with the attendant risk that I accidentally disable the car? 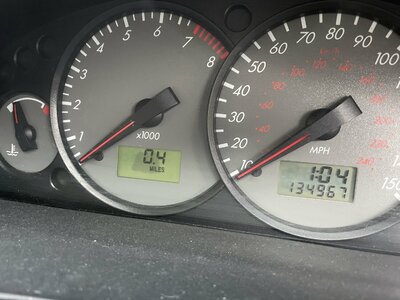 Mine actually drove today! .4 of a mile, running great. No lights on the dash, hasn’t happened in a long time!
Reactions: Foobar, Mako, martw80888 and 3 others

I hope you have the opportunity to take her further in the near future!

When you're good and ready, she needs exercise.

DG reversed out of the cave today and into the warm sunshine where I replaced the damaged ariel. Simple job really, you just need a T25 torx bit to remove the ohd and ariel bolt.
I left her parked outside hoping for some overnight rain to soften the months of grime that needs washing off.

Mako said:
I hope you have the opportunity to take her further in the near future!

When you're good and ready, she needs exercise.
Click to expand...

All in good time! My plan was to do the NS CV boot, but the weather has delayed me and I can’t get the space at work atm. 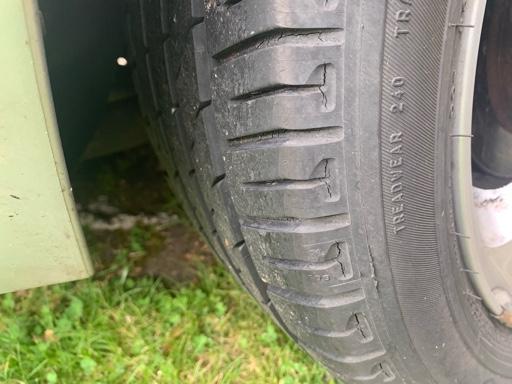 today the original rear tyres got replaced. Not because they were low, still 1000s of miles in em. But rubber is cracking so swapped the 215/50 to 205/55s